Poppy has a sleep over last night so Jordan took her for a walk to get our coffee ! Great start to the last day.

Lisa went to work a little bit later to make the most of Poppy time and to farewell me.

Right on 10am John , Jordan and I set off for San Francisco. It’s a beautiful warm, blue day and they are taking me all the way to San Francisco. About 1.5 hrs with some great signs along the way.

There are a number of levy here which cater for the farms in the area. Many crops are grown here.

I could sing my way around America!

‘Are you going to San Francisco….’

Visiting any area of America produces the opportunity to sing about it!

We arrived via the rather beautiful Bay Bridge. It was replaced after an earthquake brought down part of the old bridge.

It has a great approach and is a rather lovely structure.

We arrived into SF and drove along the Embarcadero………

past all the rejuvenated piers until we reached pier 39.

We parked the car and walked out on pier to Scomos. It’s an old restaurant – like bring on a ship. I had a great shrimp salad. And a glass of Rose!

The day was perfect so we walked along the water. I admired the people swimming! It would be just a little chilly!

Then John took me on a tour. Of course the famous zig zag Lombard St featured.

We arrived at Grove St at a rather small hotel, one block from the painted ladies of Alamo Park. John and Jordan helped me in and then it was goodbye. Next time I see my daughter in law will be with a baby in her arms.

As the weather was so lovely I headed straight out. Up the hill to Alamo Park and the infamous Painted Ladies. SF style houses painted different colours.

I then walked …… and walked……. past some great houses.

Until I had passed numerous homeless people to reach Union Square where I had stayed years ago.

By now I was quite exhausted so had a cup of tea! Watched the passing parade and caught an Uber back to the Grove Inn.

I refreshed in my little room and went to the Alamo Square Seafood Grill. What a find. It was a little FRENCH ! place and I had the best fish fish! Grilled blackened snapper with delicious veg. And a glass of Chardonnay.

A beautiful, silent night’s sleep in the four poster bed !

Followed by a wonderful breakfast made by Willa at the BnB we stayed in.

If in Woodstock you should stay here

I guarantee it’s terrific. Breakfast was beautiful. Egg Pie, sausage, fruit and croissant. All while chatting to Willa from Montreal and husband Dixi a former Austrian ski instructor.

We headed off to explore the covered bridges. There are over 100 covered bridges in Vermont. They say they are covered to make them stronger and protect them. It seems to work as most are standing well – though some have had work done on them after storms back in 2011. 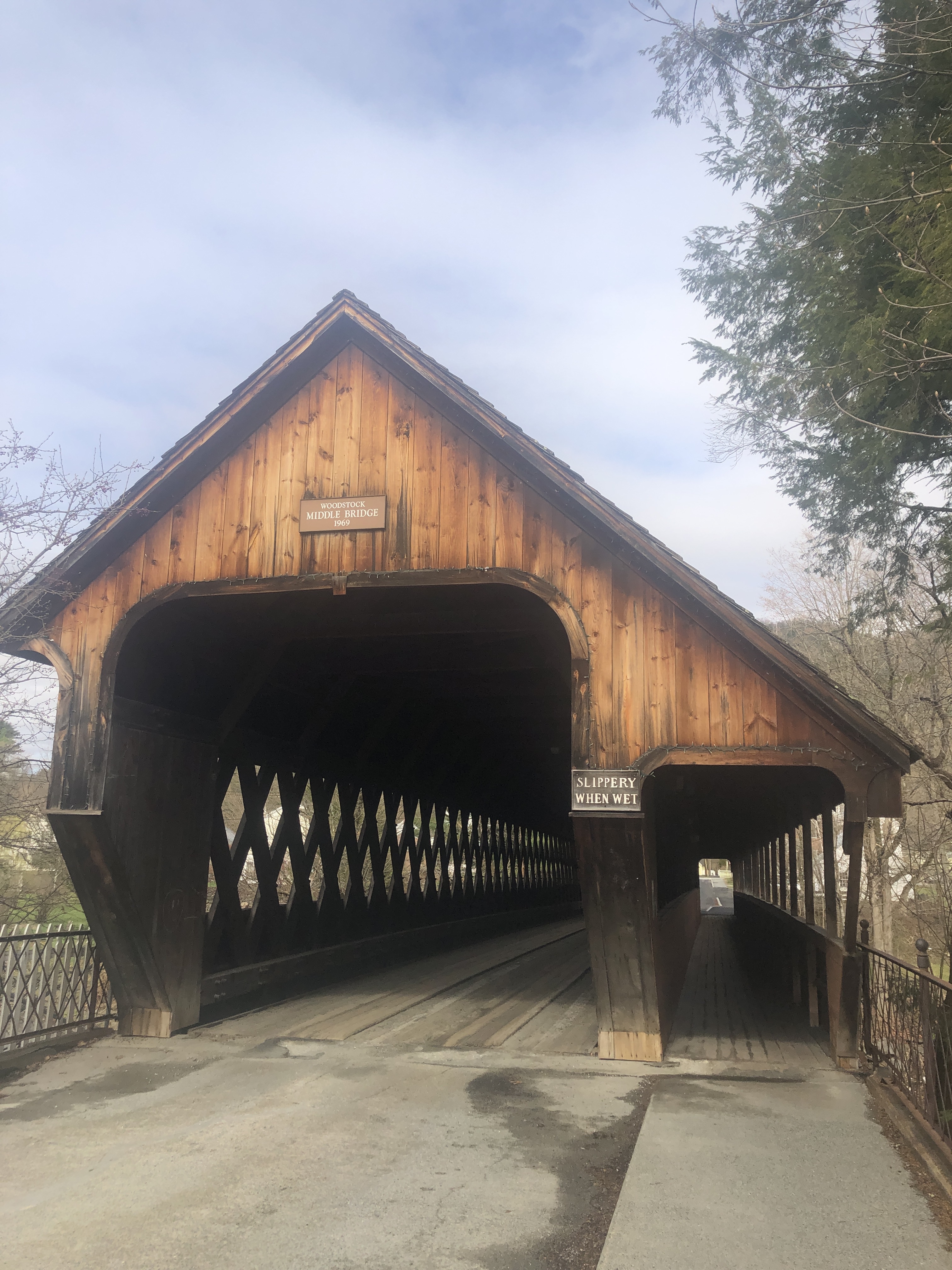 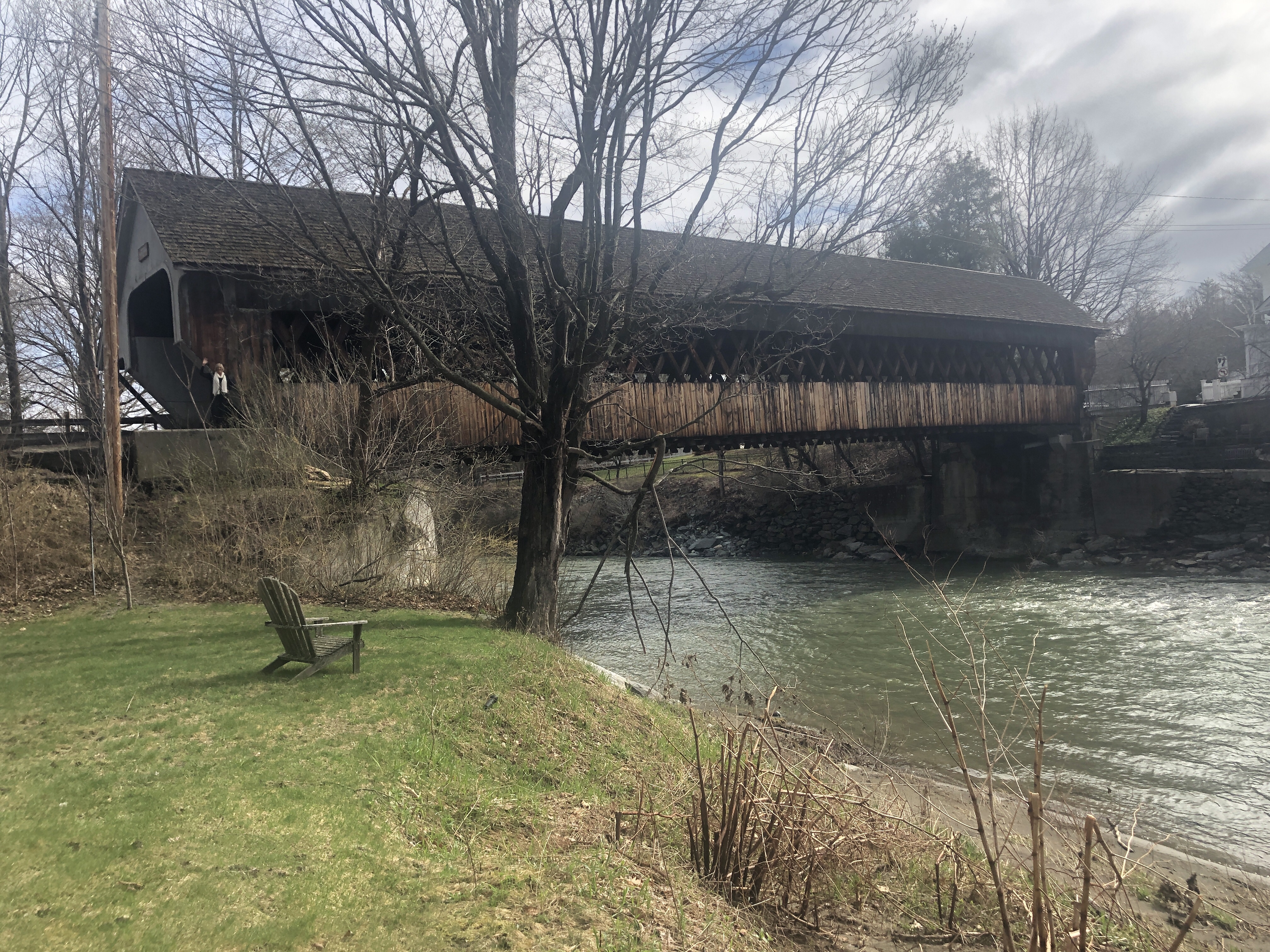 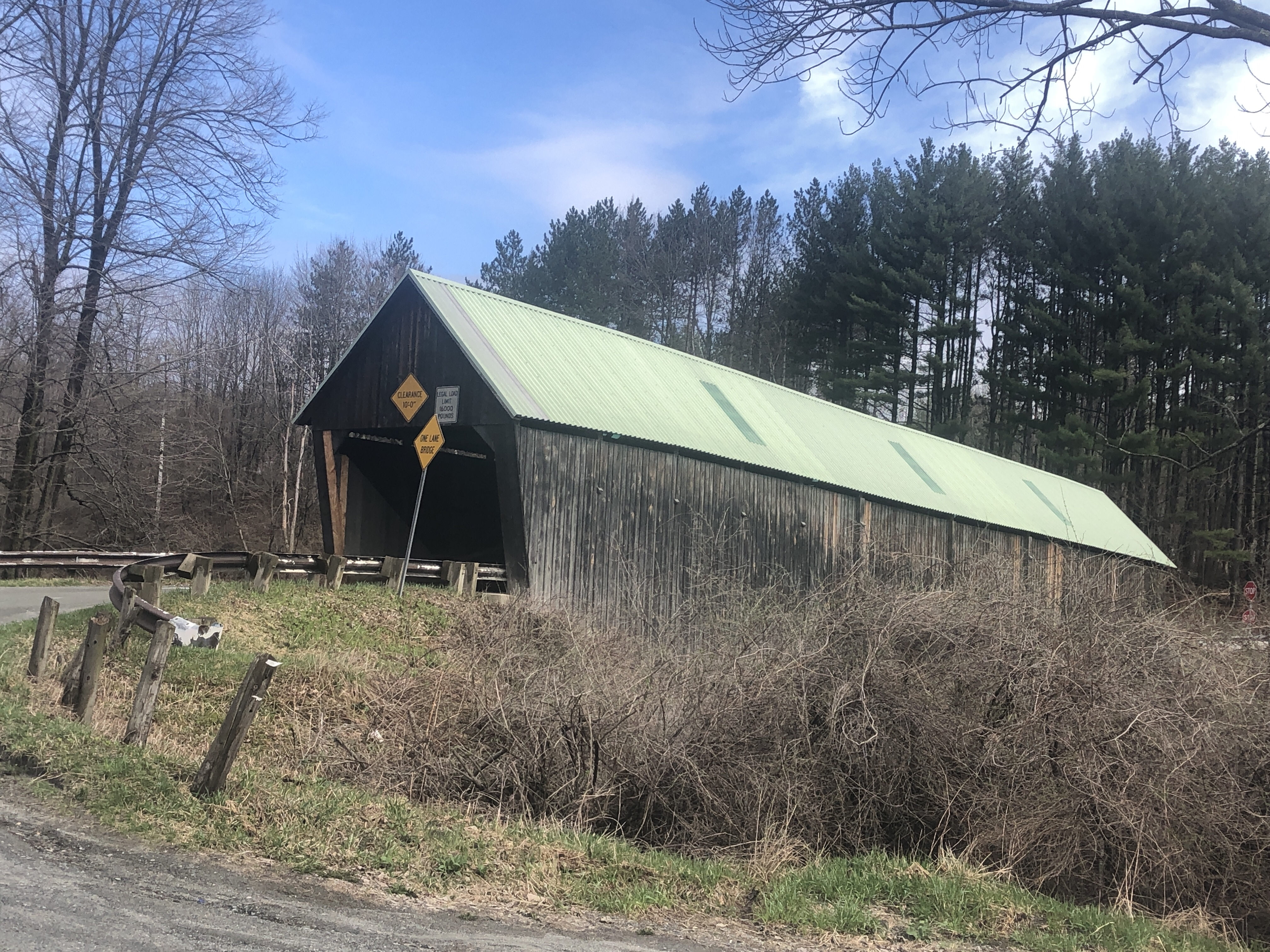 Lincoln: a fully enclosed one.

Then onto Quechee. It was amazing as the river dropped and the water rushed under it. 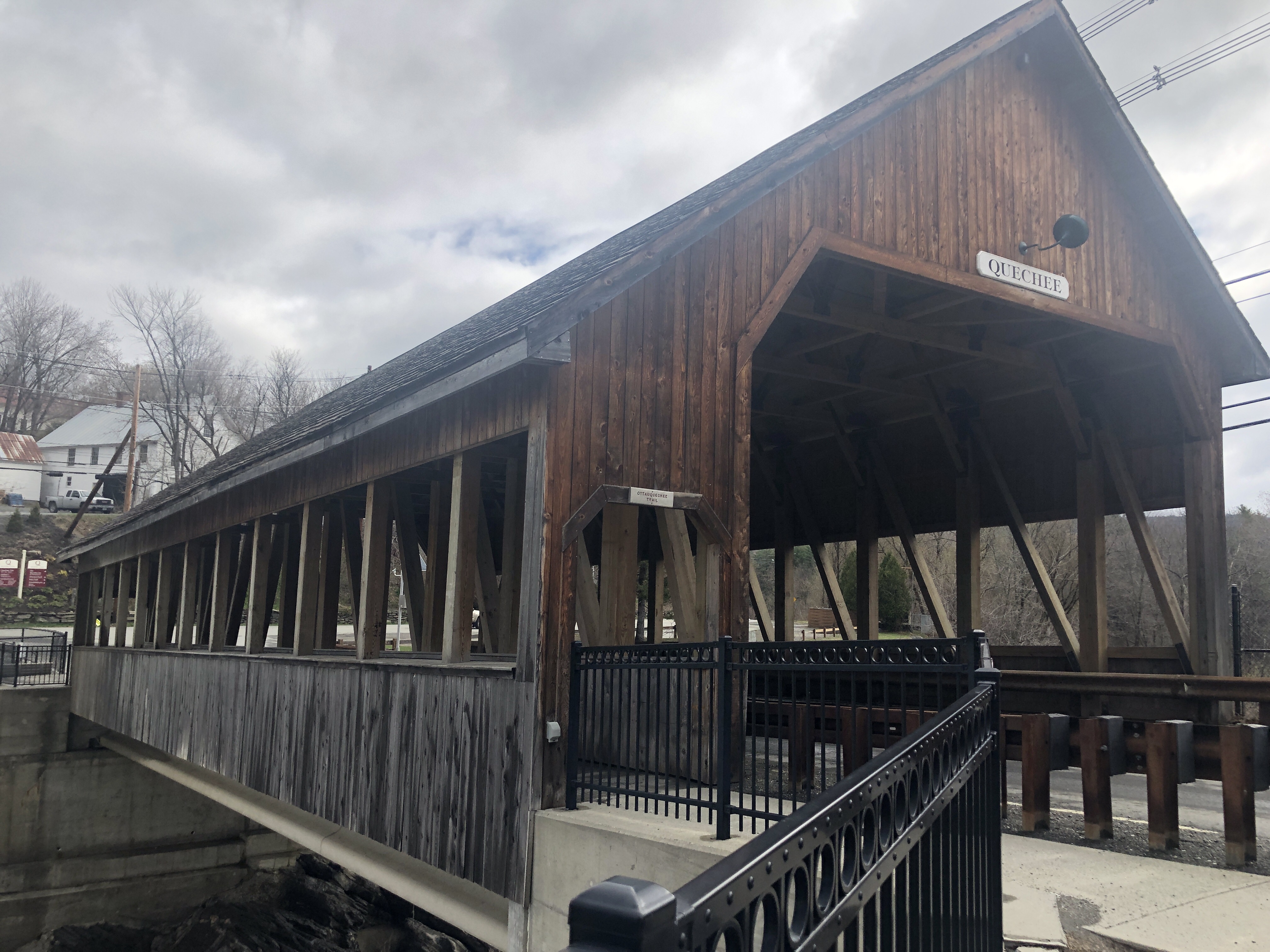 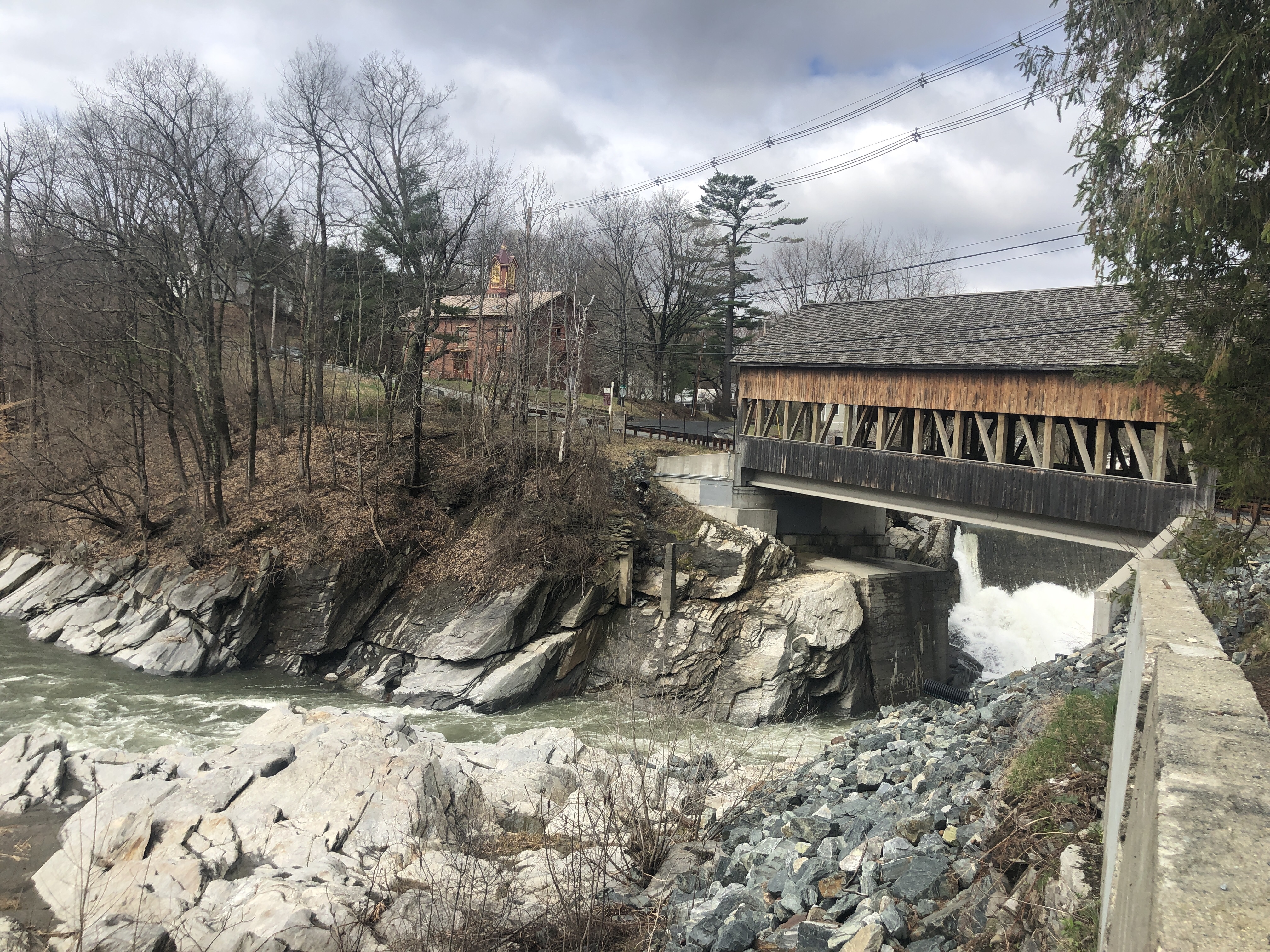 Then we headed north to the White Mountains. It’s not the season to be here. No autumn colours ( like when I visited with my sister ) but still snow around.

Locals are heartily sick of winter. Roll on warmer weather!

We wound our way through the mountains. Stopping for the view. And the odd covered bridge!

We made our way to the coast, to Portland, our next stop and decided the drivers are more polite than in Australia. For a start, when crossing a road in a small town, the cars automatically stop for you. Not even at a crossing! They also don’t drive fast!

We arrived in Portland, a beautiful coastal port (which is undergoing a big surge in tourism, ) with plenty of time to explore.

We’re staying at the Portland Regency Hotel & Spa which is considered an historic hotel. It’s well located and helpful staff guided us to the best oyster bars. We’re keen to try the oysters.

So we left our bags and started walking!

A beautiful sleep always restores you and Sag Harbor https://www.sagharborinn.com

is a beautiful quiet place to stay.

We had dinner last night at Lulu’s a rather smart restaurant run by Italians. http://www.lulusagharbor.com/index.php

I was still a little full from my chicken salad at lunch – it also may be from the beer at Montauk brewery.

Do you ever get to the stage in holidays where you just can’t decide what to eat when you are always in restaurants? Well it’s day two and I already feel that way! I’ll have to get over that. We’ve got three weeks of eating out! I have to pace myself.

So the girls – Jordan, Lisa and I ordered a few plates to share. Octopus with a touch of pork belly , burrata and grilled artichokes. Followed by a small shared pizza it was perfect.

We took a lovely Sunday morning stroll around the streets of Sag Harbor. It was clear weather and so quiet. The houses are lovely. Such distinctive Hamptons style. 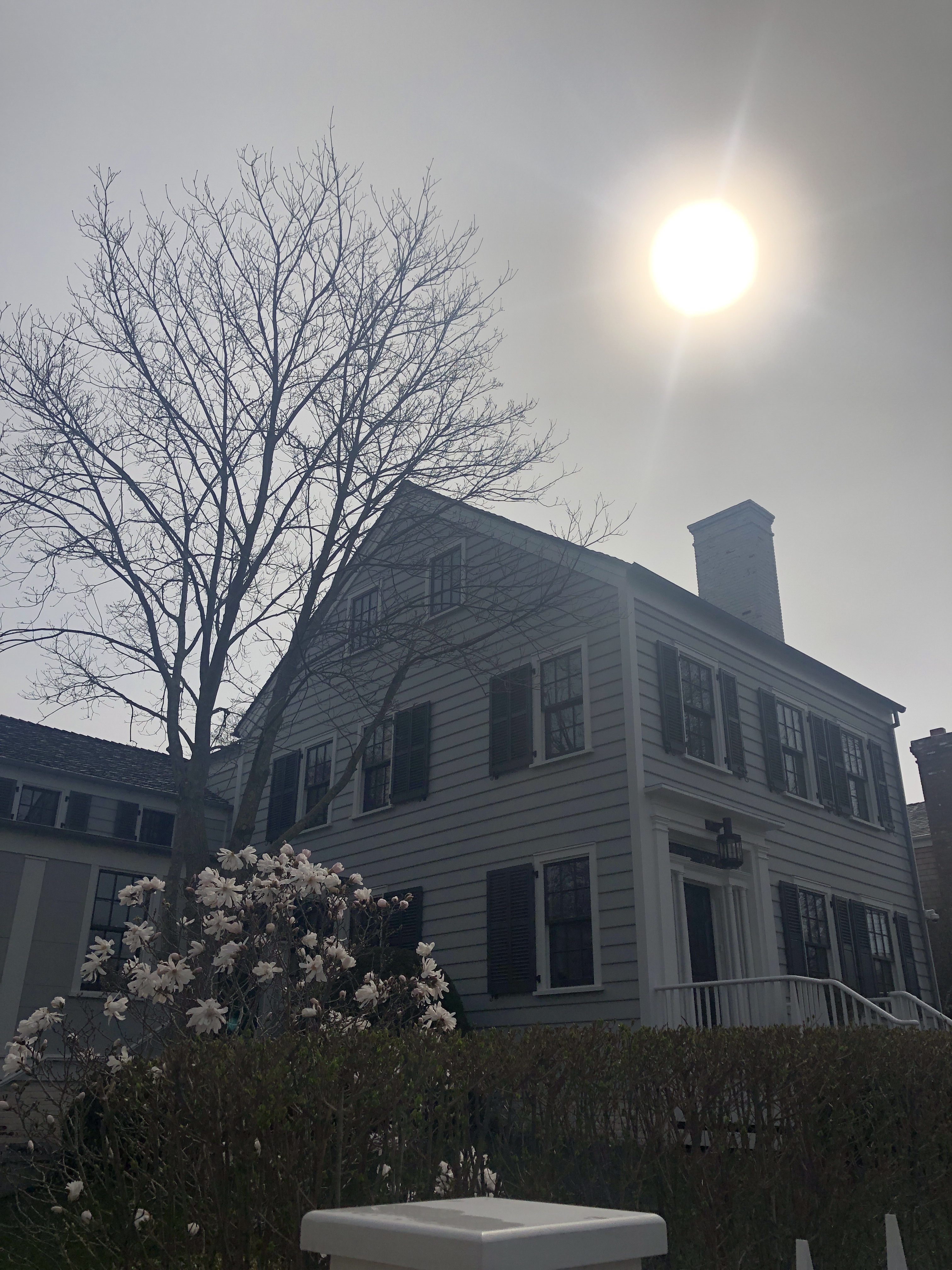 The gardens have wrapped their shrubs to protect them from winter frosts. It looks like they have their pjs on!

There are many impressive buildings and churches in this lovely town. 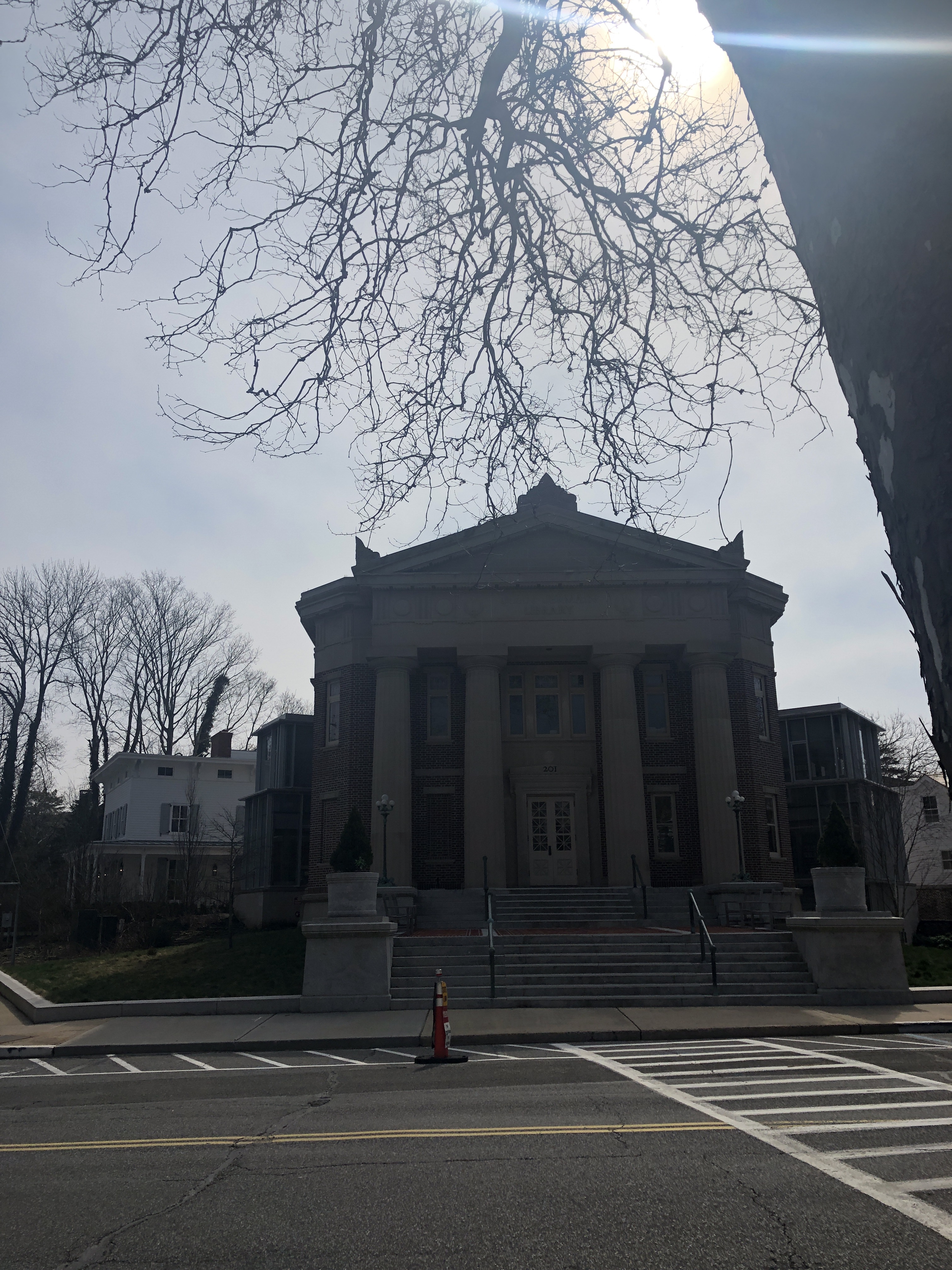 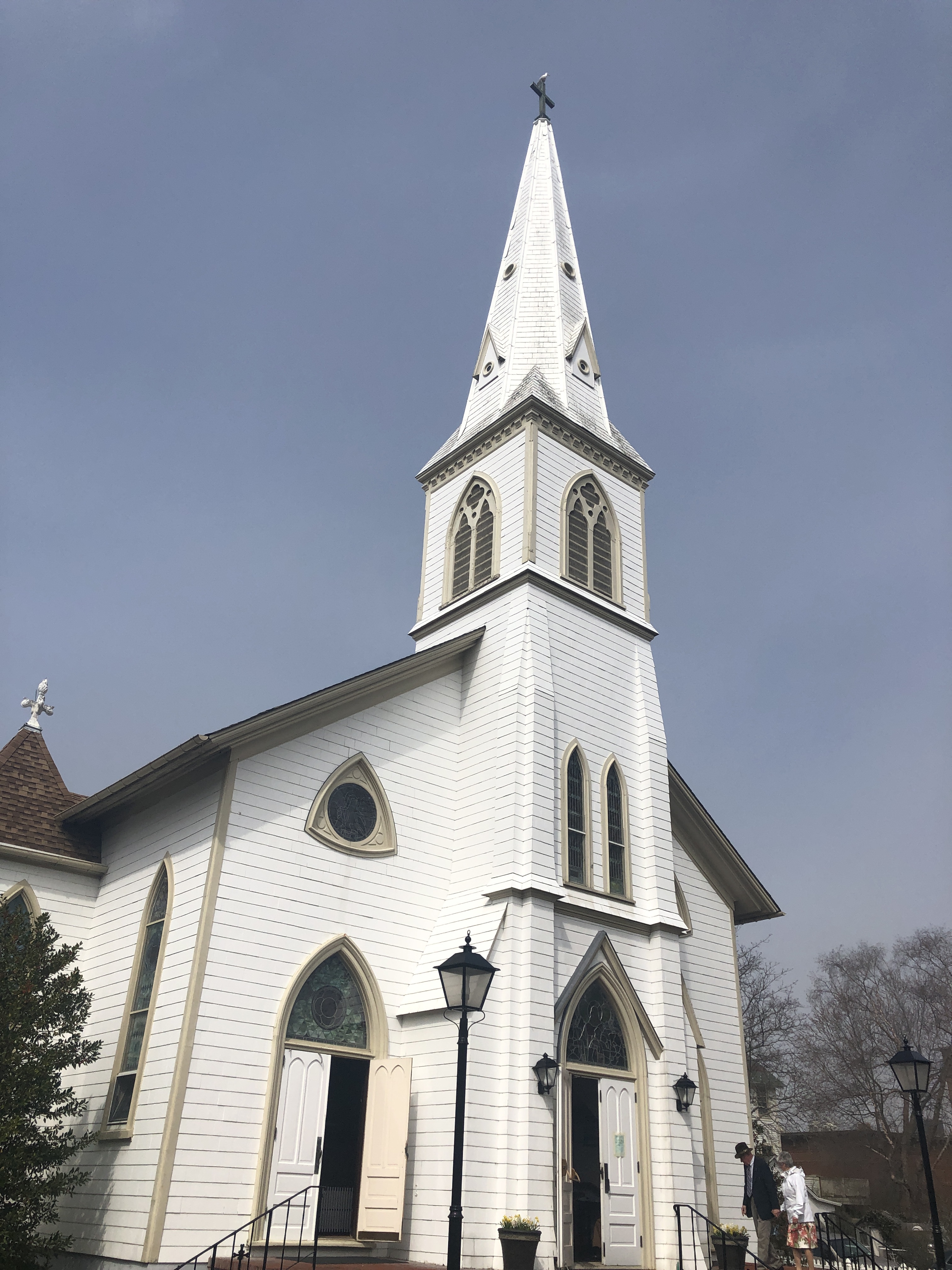 I popped into the Catholic Church as the congregation were arriving. They were so well dressed! It’s Palm Sunday.

We continued down the street past the old clock and the Spring flowers. 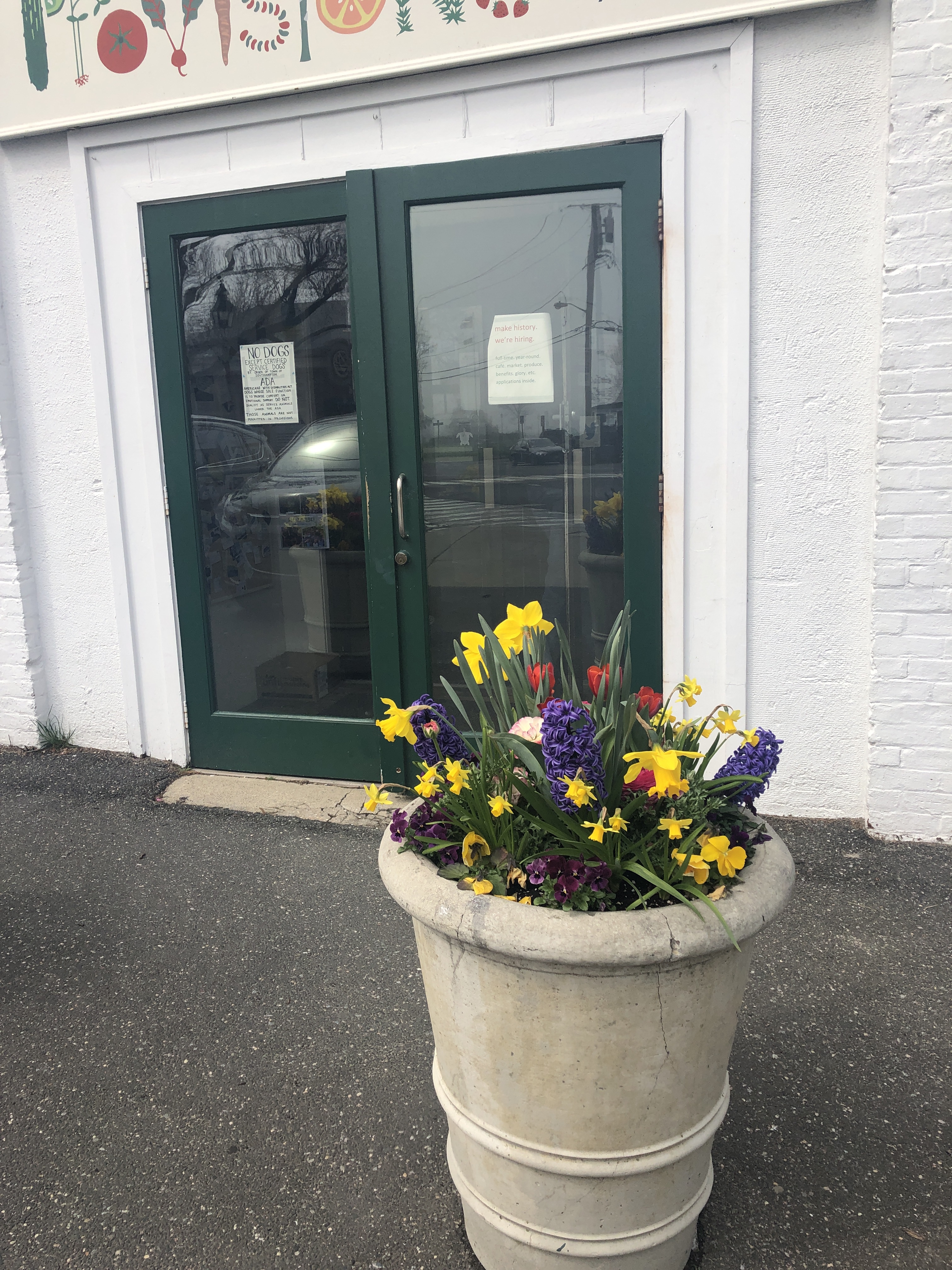 We decided on a Mexican place for brunch and had a short wait for a table so sat in the large garden.

They had the best omelettes! 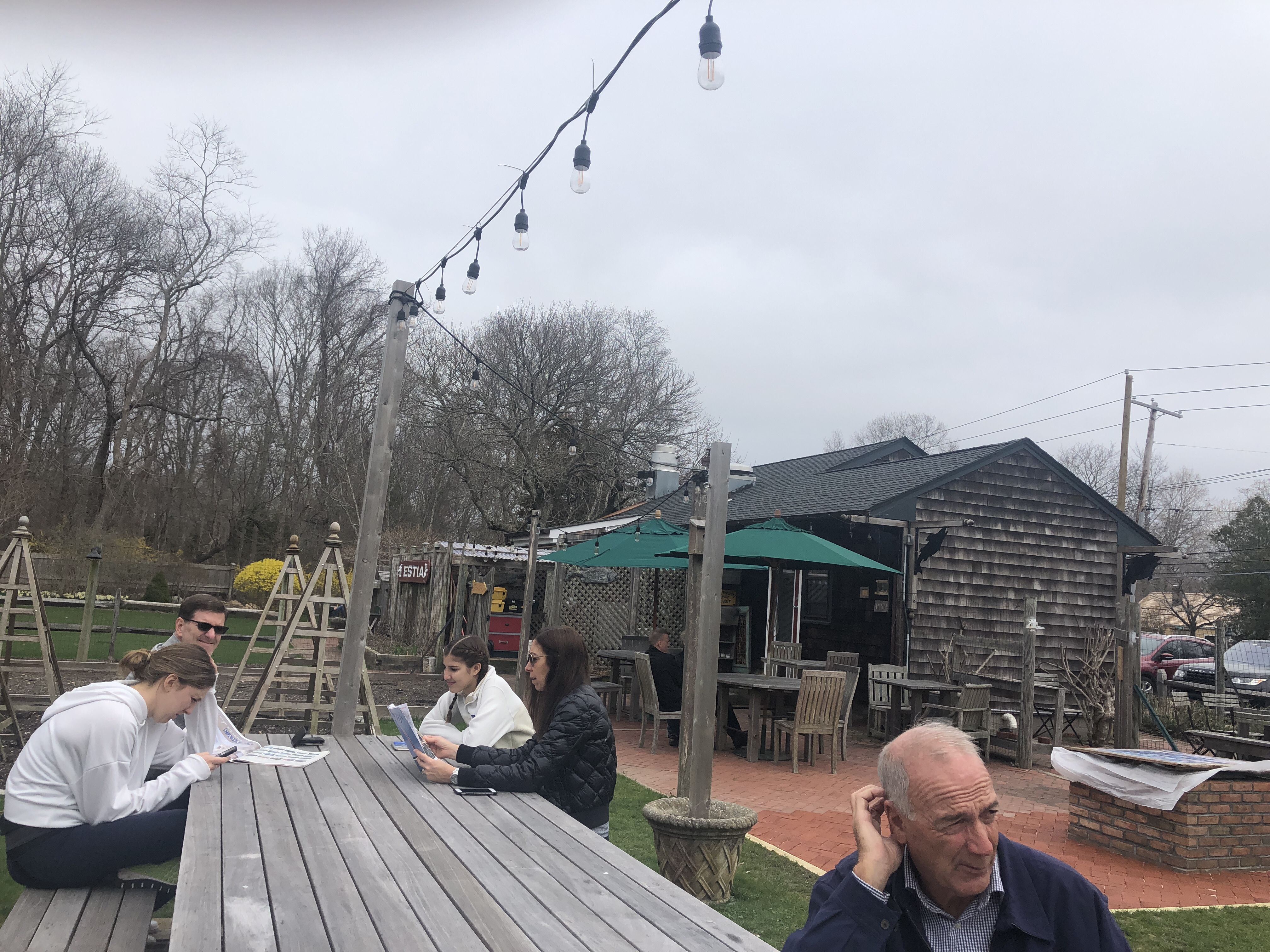 We seem to do a lot of eating !

This afternoon it’s back to New York.

Yes, we are flying off to New York tomorrow!

It’s almost exactly a year since our son Rob married Jordan in Santa Barbara. They have been living in NY and we haven’t seen them since then.

So we are excited!

We land in NY on Friday at 5pm and will head straight to Sag Harbour in the Hamptons for the weekend. Sounds good doesn’t it.

So follow along for our three weeks in New York, Quebec, Montreal, Vermont, Boston and Newport.

The words of the Frank Sinatra song sums up New York.

New York is without a doubt a fabulous city. This time my visit here is different. Not just a tourist, I’m here to visit my son and his new wife and a group of fabulous swim trek friends.

We arrived very late after delayed flights from Havana to Miami and Miami on to here. So we knew it was too late to have dinner with Rob & Jordan.

Our air bnb in Charles Street West Village is in a perfect spot. It’s in a pretty little street between 6th & 7th which is in the heart of the West Village. It a good air bnb but not perfect! No washing machine and for me, not enough light or places to hang things.

I’ve started to become quite an expert on what the perfect air bnb should have. But it is NY and though it’s small it’s well located and no mountain of stairs to climb.

When we entered, there on the table near the door was a framed photo with a note. It was from Rob and was a photo of me looking up at him. Happy Mother’s Day the note said. 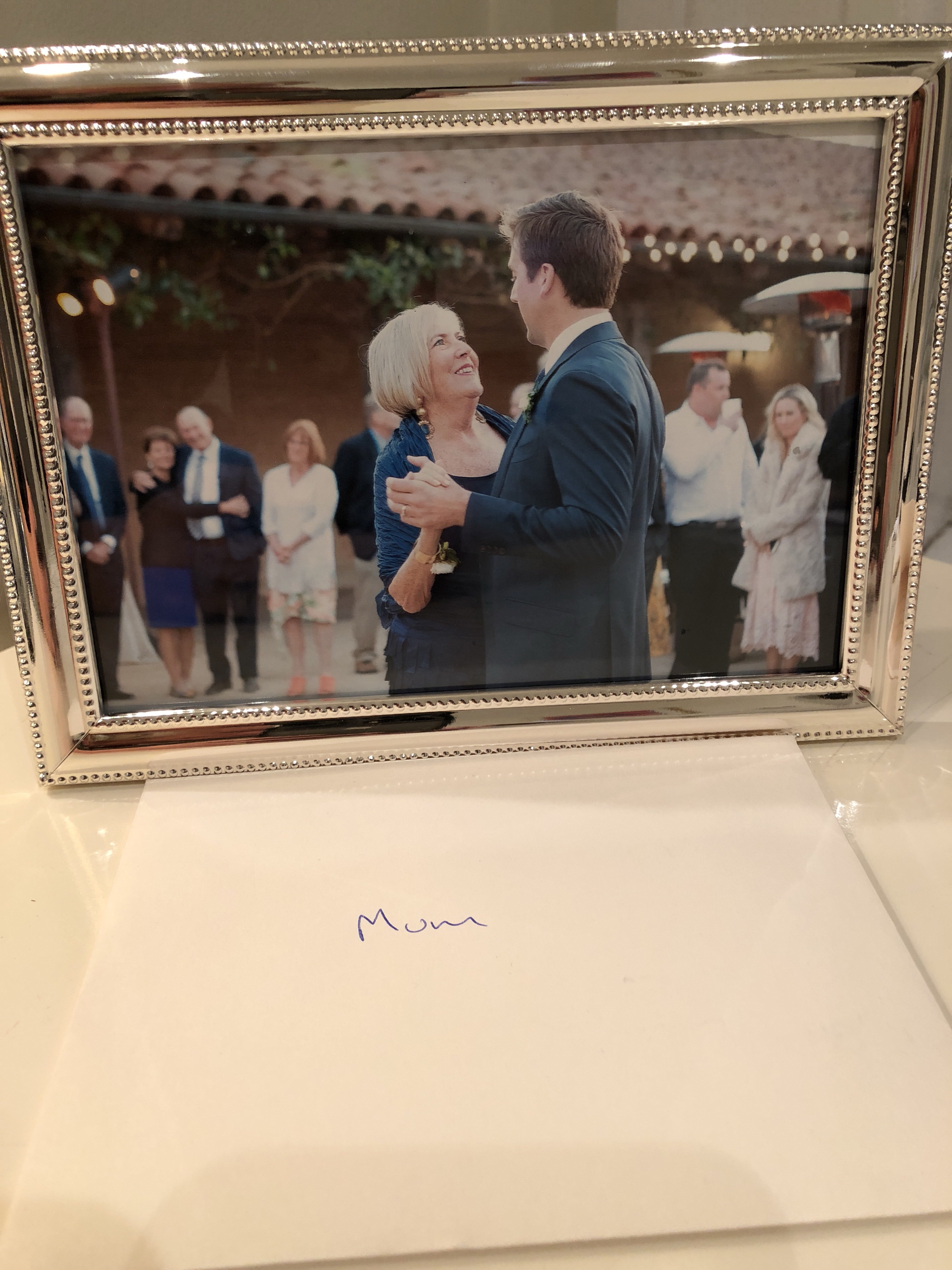 Needless to say I got teary.

We headed off the next morning for the FDR memorial.

I’ve never been to Roosevelt Island – in fact I didn’t really know about it. It’s an island in the river across from the United Nations building which is next door to Lynn and Lois’ apartments.

We got the cable car/ tram across river and walked along the river front. 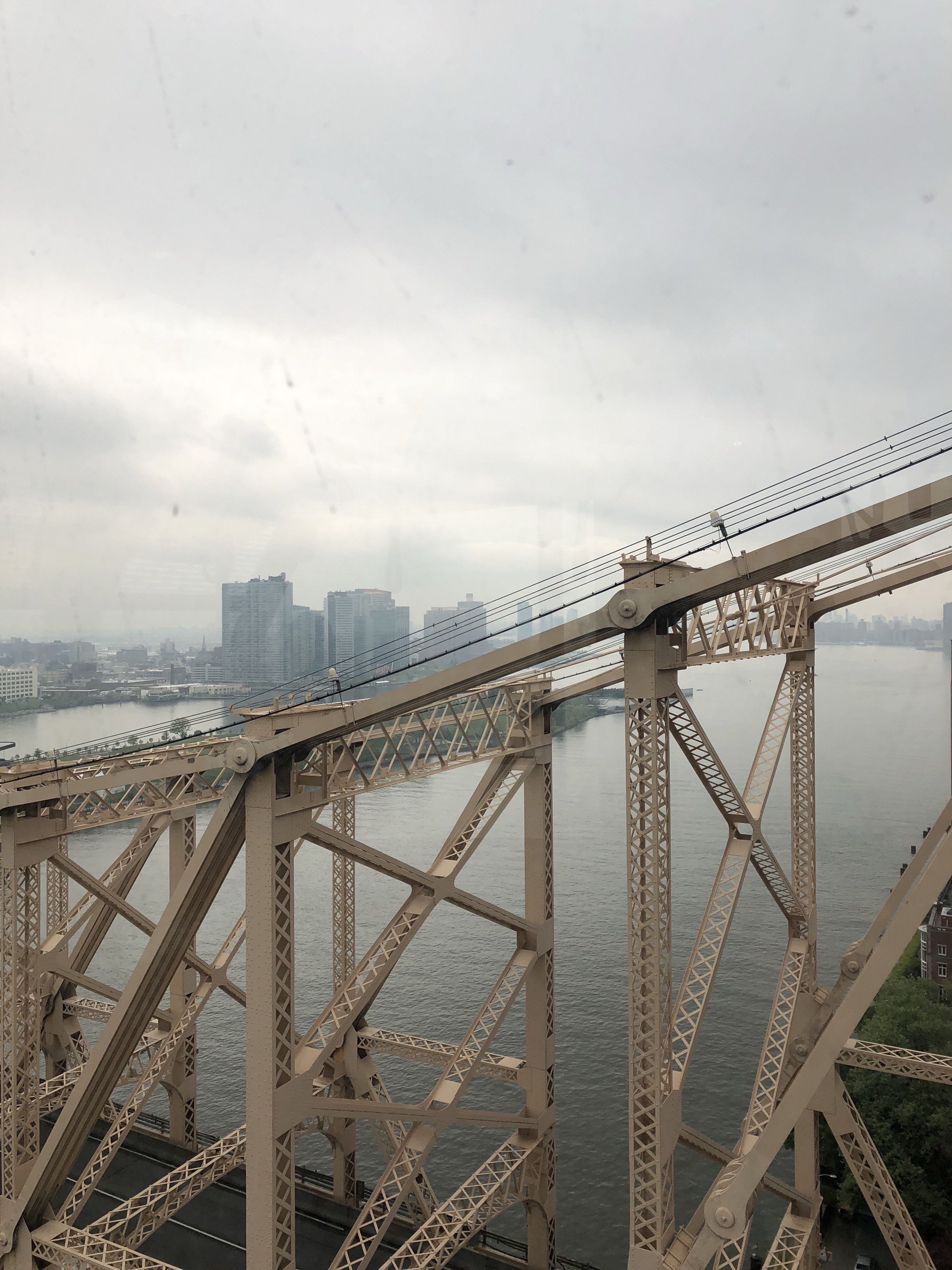 Lois told us the history of the island. It was called Welfare Island and was home to the sick and destitute.

We passed an old hospital- no longer used but so lovely.

Lois filling us in on Louis Kahn the architect who designed the memorial to Roosevelt but died before it was started.

Lois, a landscape architect , was one of 5 women out of 500 students, taught by Kahn. She found that glass ceiling.

We walked along the paths towards the point of the island. Like a ships prow.

It’s so good being back with the group we met in Galapagos. Betty from LA, Lexie from Mexico City, Bill from London, Barry from Toronto and Steve & I. 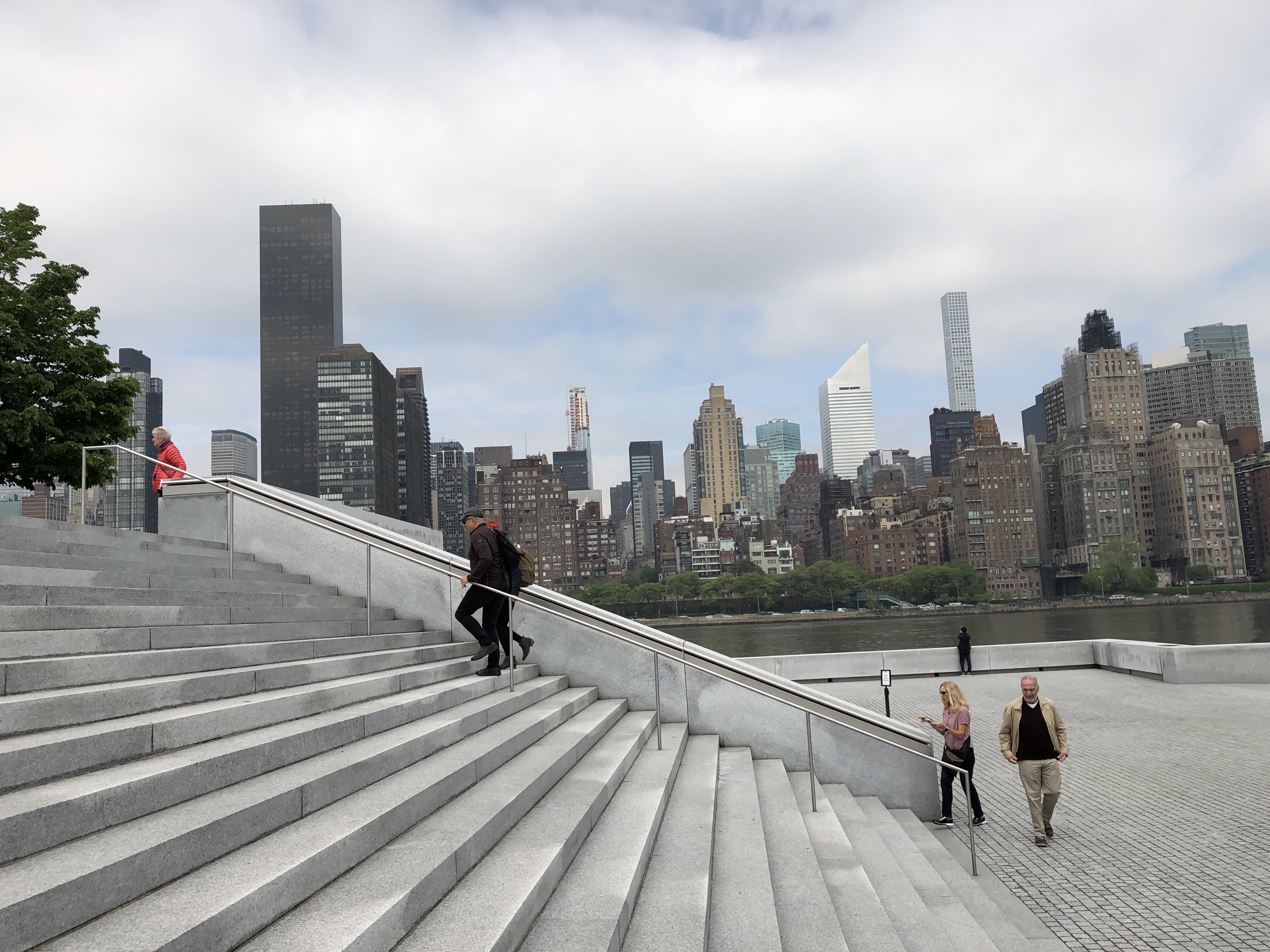 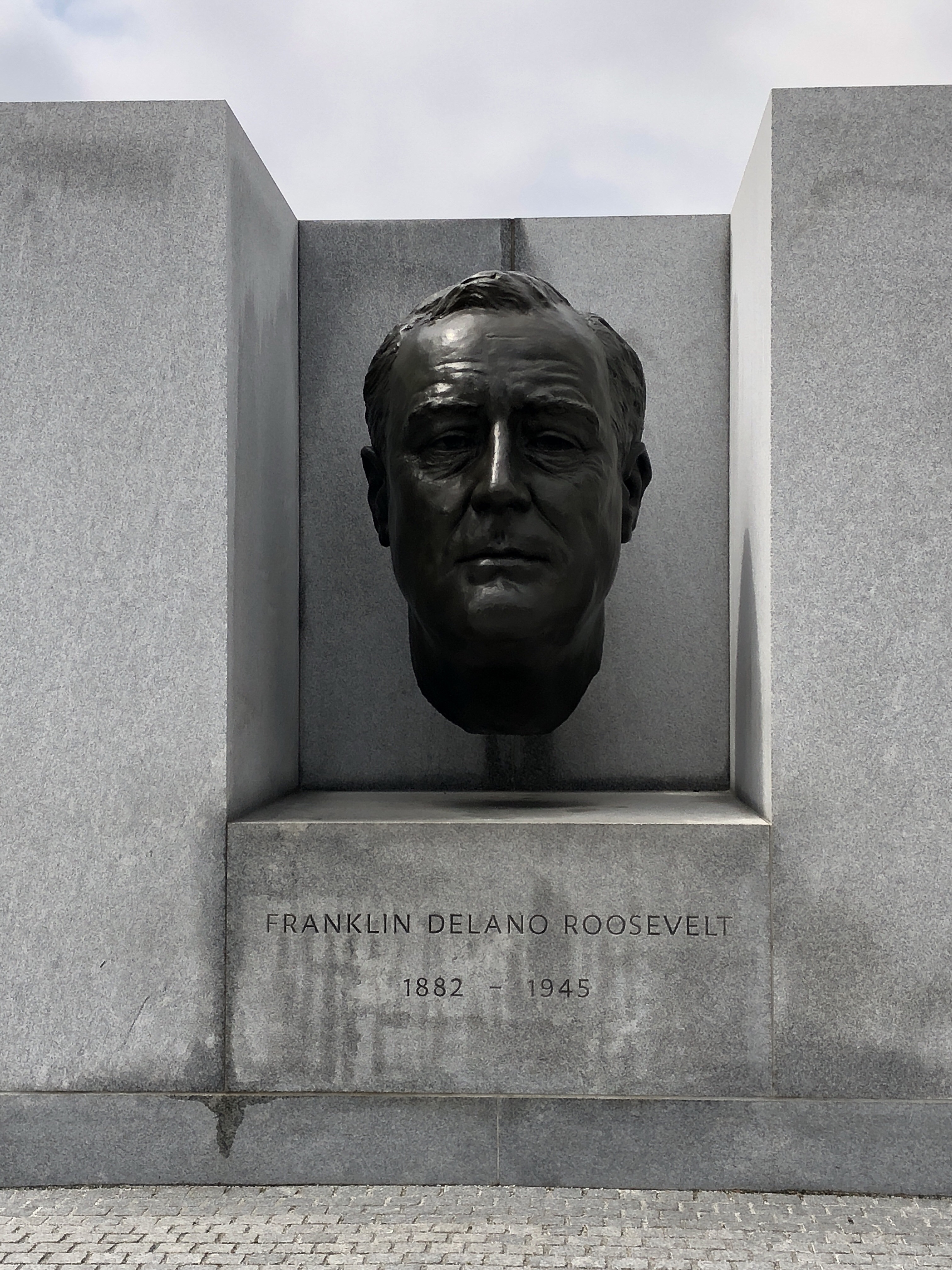 We puttered along after the memorial and took the sky tram back to the mainland for lunch at Moonlight on 59th street. a typical NY diner – a bit upmarket and great lunch food.

Then for some speed shopping.

Why is it that men can shop so quickly ? In about half an hour Steve bought 4 pairs of pants and 2 beautiful Ralph Lauren jackets and a belt! He headed home and I went shopping for myself.

I had about an hour, got locked out of dressing room and bought one pair of black pants and had very tired feet.

Finally caught up with Rob & Jordan after they finished work.

We headed up to Lynn Sherr’s apartment near to the UN building opposite Roosevelt island where we’d been this morning.

The apartment on the 16th floor is amazing and the rooftop had the most fabulous views. 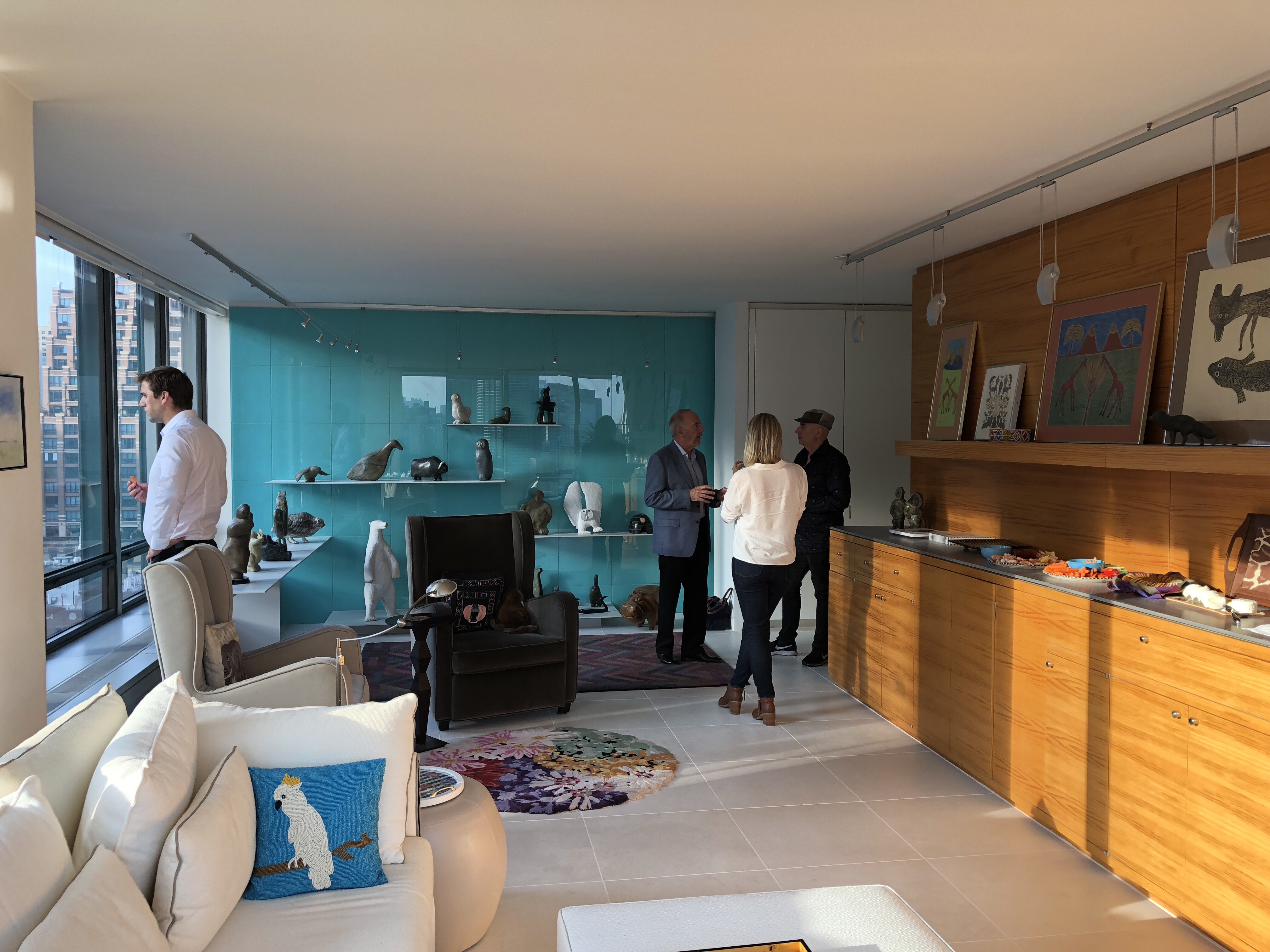 The swim group were all there and we had the most wonderful fun night. 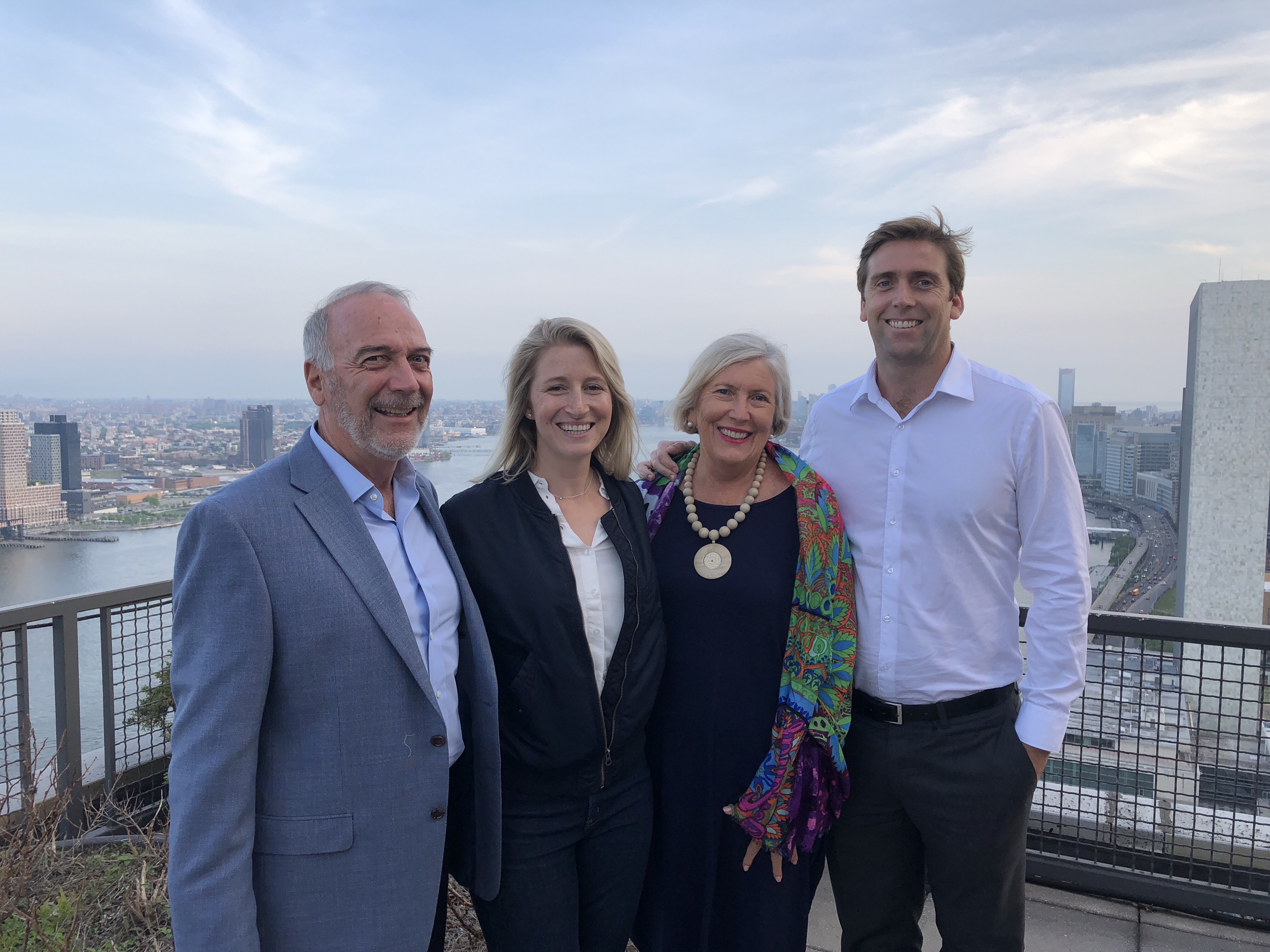 Beautiful food, great company and so many laughs. Very special.