Arrived in Biarritz this afternoon and found our hotel Radisson Blu after driving through the very busy streets that make up this sea side village. It’s a haven for holiday makers particularly surfers and the well heeled. It’s a collection of beaches with streets running up from the beaches and bays filled with cafes, bars ( particularly Tapas bars so close to Spain) shops and patisserie ( not for the gluten free)

Steve immediately donned his budgie smugglers and headed for the rocky beach bay for a swim and I dodged the crowds looking for a place for dinner. It’s crowded for two reasons!  It’s the middle of summer and there is Le Fete at nearby Bayonne which attracts thousands of people – many of whom are dressed in white pants and t – shirts with a red scarf tied jauntily around the neck. I must find out the significance of this dress. There are hundreds of them round town.  And we will because tomorrow we head into Bayonne where family friend Mark Chisholm lives with wife Lauren and 5 children. Mark is the Captain of the Bayonne Rugby team and somewhat of a local hero. We’re joining them for a day out at Le Fete. Can’t wait !

Steve returned from his swim hungry and thirsty and I was the hero because I had visited  Carrefour the supermarket and bought him a Guinness,  chips and a lovely terrine to snack on till dinner. We missed lunch during our flight down. It was delayed leaving Paris and the tiny snack on board was never going to fill us up.

Tonight we’ll go to one of the many restaurants near Les Halles for dinner and a wander around the Centre Ville.

Tomorrow another swim before we head to Le Fete. 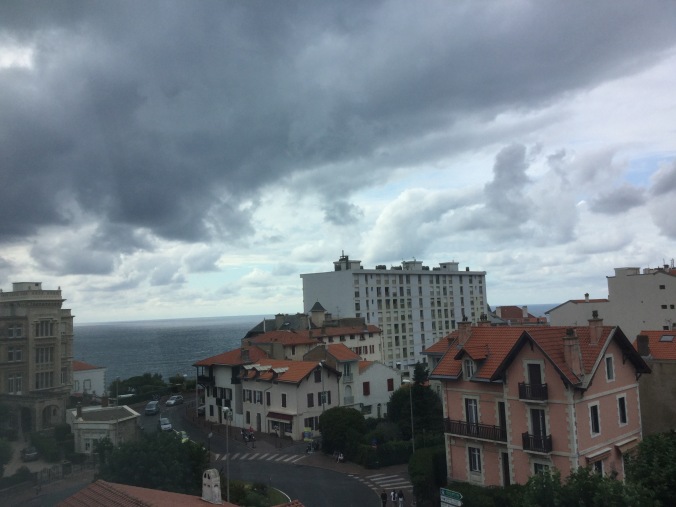 The view from our hotel room at 6pm . As you can see it’s a little cloudy and not so blue. Where’s the summer gone?

2 thoughts on “Biarritz. For the ritzy. Friday 31”