There’s nothing like a swim before breakfast in a warm climate.

Another dosa with sambal and assorted chutney along with paw paw and pineapple made a perfect breakfast before our trip to Munnar in Kerala.

It’s supposed to be a 4 hour trip but another traveller warned the road for the last part of the journey was very rough.

Our new driver inspires confidence. He’s well dressed and has good English and doesn’t seem preoccupied with his hair.

Setting off around 9 we headed west. We were surprised that this area of Tamil Nadu seemed more prosperous.

After a coffee stop where for the first time the owner hinted that a tip might be in order. So as he also supplied a cleanish squat toilet we did tip. At 200 rupees ( $A4) we were happy to leave him a tip.

Before long we were driving towards the area known as the Western Gnats.

Another stop at a mud brick works where three women were making mud bricks and keeping the kiln working. Such hard work but they were charming to us allowing photos. Our driver said they make 200 rupees a day but are housed by the Govt and their children educated.

Driving along you come across all sorts of things. Including parades with firecrackers. We’re told they are festivals! 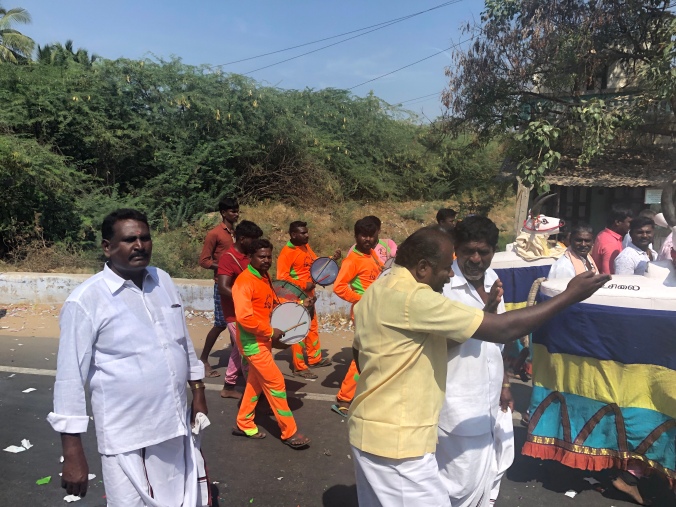 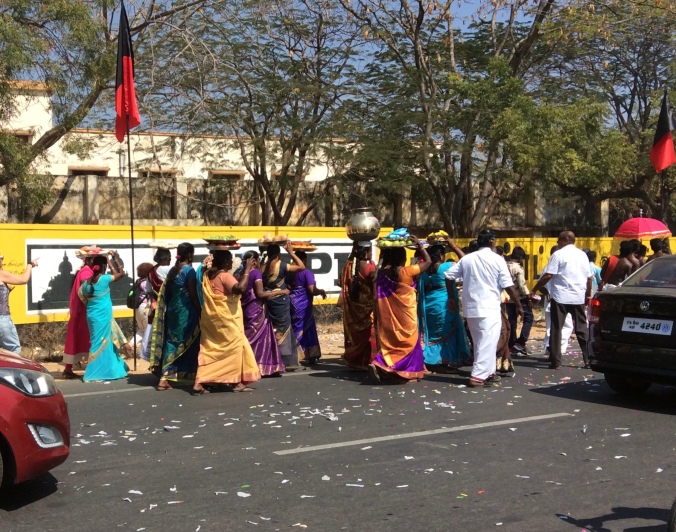 Climbing up the Western Ghats was so interesting. The views spectacular. We hit the top and crossed over into Kerala state. Here the roads haven’t been upgraded. They are in the process of widening and repairing damage from the storms last year. It was hard going. Pot holes, dust , narrow places to pass but the views were great and the tea plantations beautiful to look at.

We stopped at a tea plantation for a tour and so found out about the process and the difference between the white tea, green and black tea ( of which there are 4 grades). The white tea has the most health benefits and was around $A24 for 600 gr. 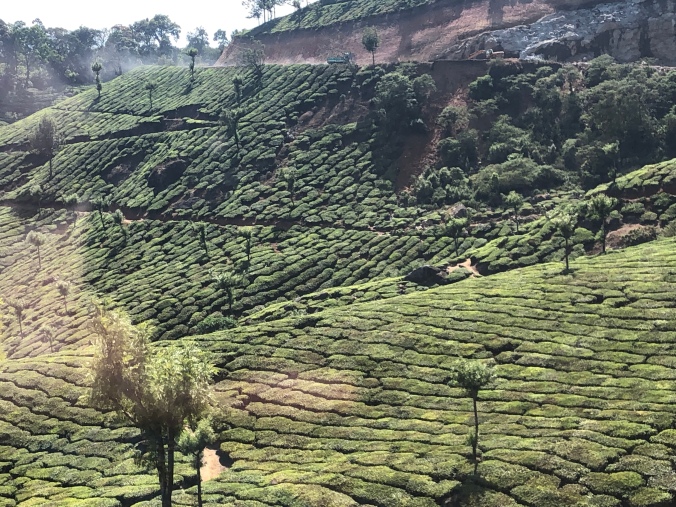 A quick cup of tea and we were back on the bus for Munnar.

This small town is the centre for tea production and Ayurveda medicines. We stopped for a quick look then continued on to a cultural show.

These Cultural shows are often fascinating but are better if you can understand what is happening. The sound and narration wasn’t good though the costumes and make up were wonderful.

By the time we arrived at our hotel the Olive Brook Resort we were ready for a G & T and dinner. This hotel is a few km out of Munnar along a very bumpy road. It’s a little oasis in the cool hill. It’s almost English style with beautiful gardens. 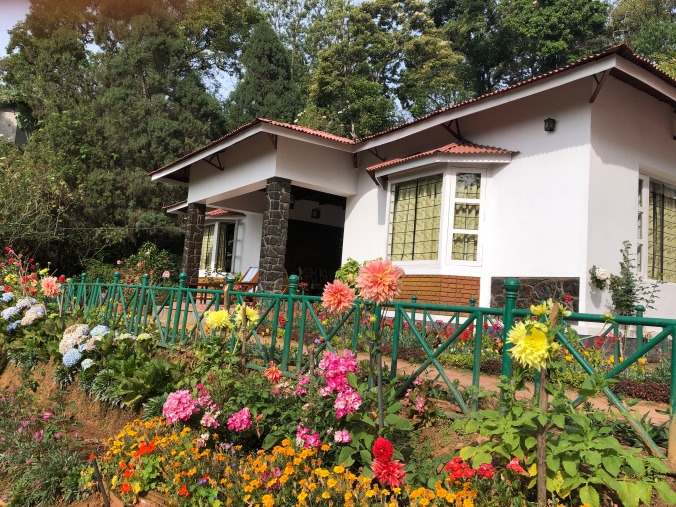 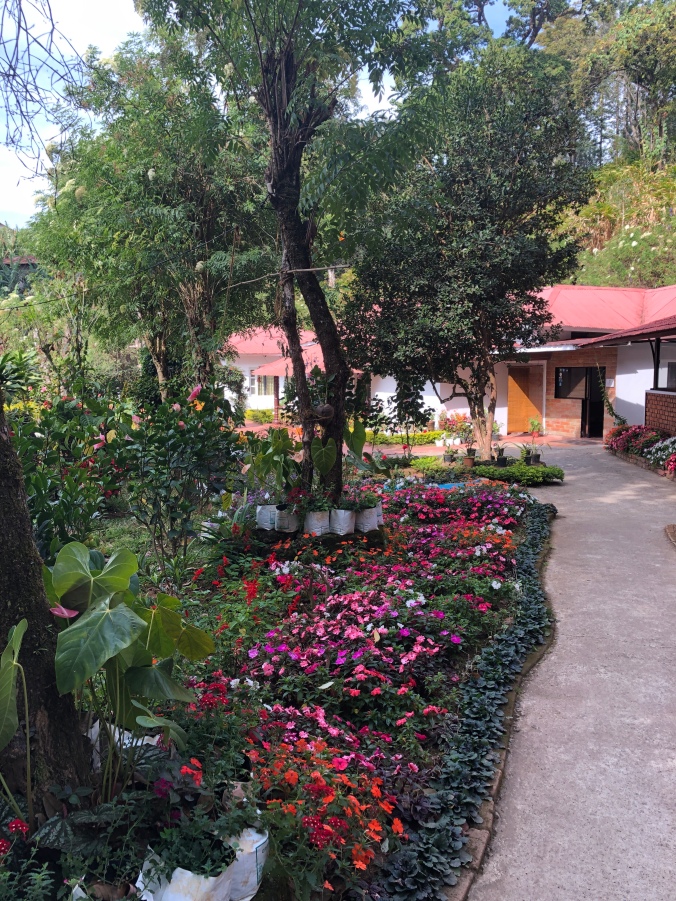 Both were very welcome. As this is a cashew area some of us has the Cashew Chicken. Delicious

Our rooms were spread through a garden and for a change we had no air con. Fortunately I was with Shelley who also like fresh air and as it’s higher and cooler here we hoped for no mozzies!

We enjoyed a great sleep and woke to birds tweeting. So different to cars tooting!

Farewell to the Bangala Hotel. We loved it. But more adventures await.

On the road in our little van we had Mr Speedy with the nice hair as our driver. He took us yesterday and we found he was very ‘hair proud’. Every time we stopped he coiffed his hair!

The drive to Madurai was once again incident free. Quieter roads and plenty to see.

Our hotel The Heritage is set in large gardens. And has a beautiful reception area and pool. Designed by Sri Lankan architect Geoffrey Bawa it reflects is love of the natural landscape, the frangipani the symmetry of design.

The rooms we have are large so three to a room. Always interesting sharing with others! But good fun.

We left our bags and booked a driver to take us to the Gandhi museum. It cost 1200 rupee. The equivalent of $24. So cheap for a half hour drive. He waited an hour while we looked at the Museum and brought us home. Between 6 $4! 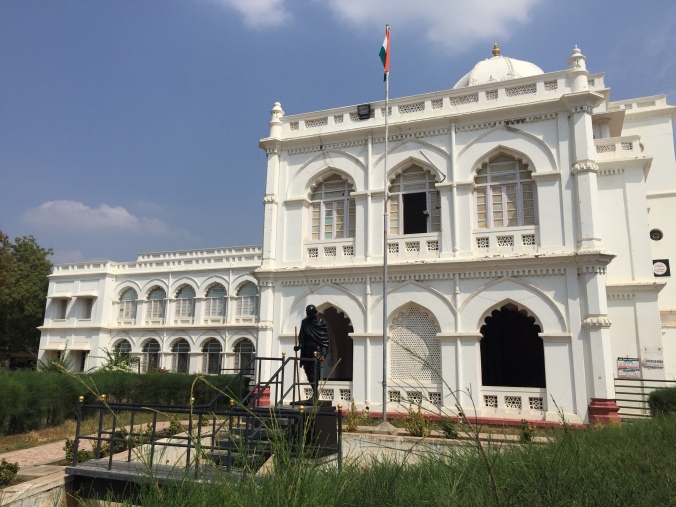 Prices here are so cheap in comparison to other countries. We are eating very well for a small amount of money.

The Gandhi museum was very interesting and helped understand just how much the people of India endured. I do wonder what Gandhi would make of present day India. There is still so much poverty. So much divide between rich and poor.

We made our way back to the hotel in time for a facial. Oh my. It sounded great and was bit in a different kind of way. The girl was lovely but quite rough in massaging my face. I had to ask her to go softly softly. But by the end my skin felt great. It was a Ayurvedic massage. Cost – about $35 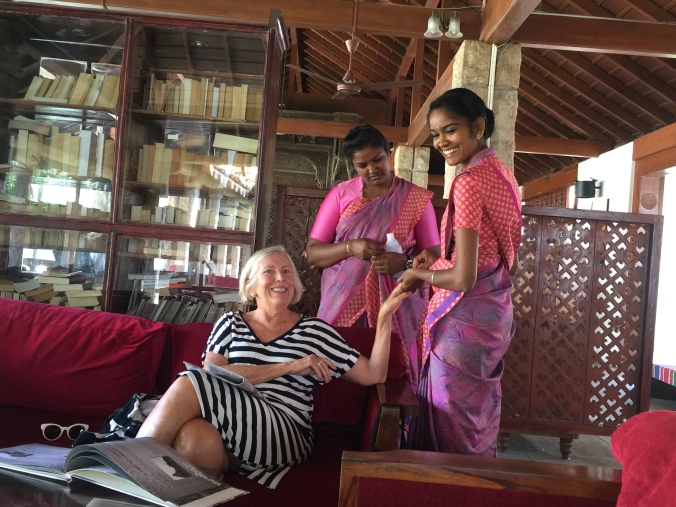 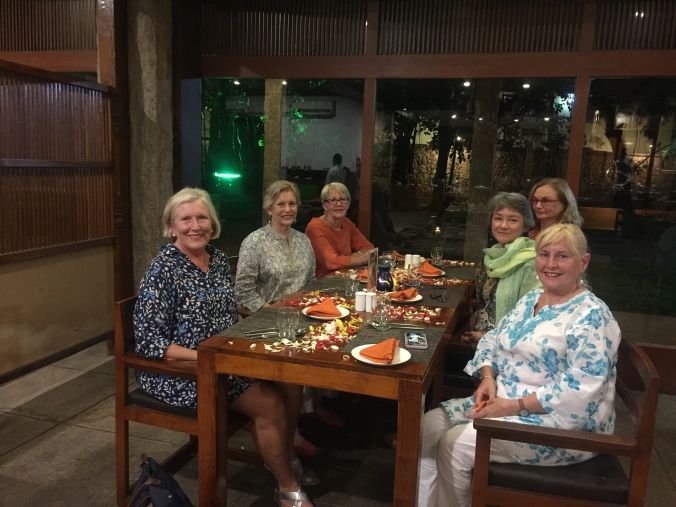 Time the. Got a quick G& T on our verandah then dinner.

The Banyan Tree restaurant is good but slightly lacks something we found at the Bangala.

The manager had reserved a special table for us to make up for our rooms not being ready. It was decorated with flower petals. Ten we got a scroll which they requested we read out. I think they got us mixed up with another group. It was a message of Bon Voyage! Wishing us a safe journey saying they were proud of us for choosing to come to India. There were at least 6 points to read out. I could barely contain myself.

We ordered a bottle of wine and the manager came over and put on such a performance. He danced with the glass as he aerated the wine. Quite spectacular! And insisted on Shelley joining him in the dance!

The rest of the dinner went without too much theatre!

Our night was quiet after that as we discussed plans for tomorrow. Yoga, swim, breakfast and then when it’s cool a visit to the Palace a rickshaw tour of the city and then the Temple for the evening puja.