Sad to leave Sanremo but as it was raining it was time to go!

Yesterday I got the train and went to Monaco. Thought I’d drop in on Prince Albert! Went to the Casino and didn’t break the bank, had lunch and a walk but it was a bit wet to really enjoy. The place appears to be dripping in money. Lots of good looking sports cars being driven around the streets and lots of women all dolled up with high heels ! Not really my scene.

Packed up the apartment and said a fond farewell to Hilda , the lady upstairs who has kept an eye out for me. Have made arrangements for Robert, an Austrian man from the school, to drive me to Cotignac! Poor man – I literally jumped at the chance for a lift.

Arrived yesterday – before the Brannocks as I was able to get a lift from Austrian Rob. He has a friend here who has a vineyard just on the edge of town. So too good an opportunity not to miss the train changes! Got here at 11:10 in the rain, but driving up the main street it looked so lovely and inviting I knew I was going to like it.
The B&B is at the top of the town just off the little square with the Hotel de Ville and the war memorial and as it was the 11 November there had just been a little ceremony . 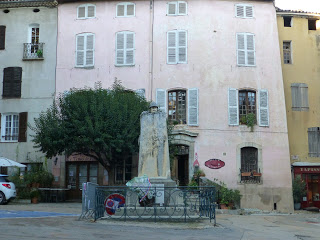 I booked a B&B with a lovely lady called Dany so I found her place with Robert’s help. It’s an amazing old house in the village … just before the cliff goes up.
She showed me my room which is like a grandma room- old furniture, big bed, rugs, heating, kettle, old tv, and bathroom. The house is a one room only per floor- literally. The staircase winds up and at each little turn(landing) there is a door. I’m on floor 2, so left my big bag on the ground floor in her workshop. She does lead lighting and has all the gear set up on the street level – though there is a main entrance in another street where you come in just above my room!
After I settled I went for lunch with Dany at her friend Martine’s restaurant. It’s on the little square near the B&B. A lovely place and Dany is so nice. That’s the good thing about being on your own, people are more open and kind.
After lunch I took a walk, and then a sleep was needed and it was so quiet I went off to sleep. Then by late afternoon when I was reading and about to go out for another walk I heard voices. The Brannocks had arrived at their new house and were talking to the other owners the Smiths. Unbeknown to them I could see them out the window and nearly called out but didn’t want to disturb them. They hadn’t seen the house before purchase and had a fair bit of business to do and as I wasn’t expected till Tuesday I  thought I’d lie low!!!! But now I know where they are! Right on the corner in the little square next to the Hotel de Ville ( town hall) . Great spot. (Ginetta you will love this village) 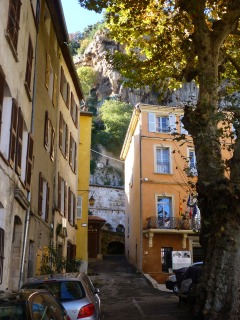 The Brannock’s brown house
When I got going I had another walk this time up the street leading to the hills behind. Really lovely views of the town. I wandered back after walking for an hour and decided to have a glass of vino (“vin here) soup and an early night.
Watched a French movie with Vincent Lindon and even though it was all French I could just make out what was happening . It was really good, moving and sad.
So off to sleep and sleep I did!