We allowed ourselves a little sleep in today at the Hotel Grotta – and despite the name, is very lovely to rest a while. It is still busy with tourists but the family who own it have all the tourists worked out and deliver the best breakfast we have seen.

We had to wait for a table for five, but when we sat down our tour guide, Ricky, came over for a chat. Good chance to get to know him. He’s young, friendly and he looks like fun.

After packing up we headed down the rocky path to the main town. I discovered the memory card on my camera had  locked and after Steve did a little panic blaming “you know who” we visited a camera shop where  they simply unlocked the card. Greek Tragedy over!

We wandered the port front, bought towels and had some lunch before it was time to head to the ferry.

The ferry was a two hour trip along the side of Naxos across a small channel and then we were landing at Schinousa Isand. 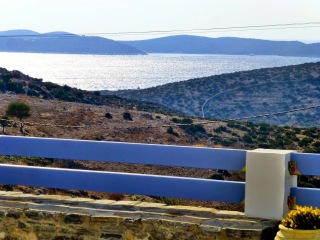 We were met by the “Lady of the House” the manger of the Iliovasilema Hotel. She loaded our bags with the ease of a weightlifter and we packed into the van and two minutes later
were walking into the cool shade of the hotel.

We got room 3 and the Wilsons got a room two along . The rooms are basic, comfortable  with  a view from the bedroom.
We met the group and started to make our assumptions about the personalities!
There are two women from Cronulla. A lovely NZ couple a little younger than us, a single delightful young man from England, a hairdresser. Another single man from England an actuary from Brighton, and a woman from Hamburg.
We went to the first night dinner to the Deli Bar with Ricky and Emma and it started out well until the fish soup was not a hit with some of the group. Oh boy!

It turns out one of the group has particular tastes and isn’t afraid to share!