What a beautiful part of the world. Today we turned left out of our hotel and crossed a bridge and entered the lovely area of Waitangi Treaty House.

Such a surprise. Such a beautiful place, where the Treaty of Waitangi was signed in Feb 1840. A Treaty between the Maori people and the representatives of the British Crown.

We started with breakfast in the garden cafe and chatted and ate before Kim& David left for home in Auckland, a four hour drive away.

Last year a new centre was opened on these significant grounds. It’s a wonderful museum. For $40 we entered the grounds and the interactive museum. Had a tour and a cultural show. So well done.

Our guide, a rather large Maori man had a wonderful gentle approach and took us on a tour of the grounds and gave the background to the history of the signing of the Treaty. All with jokes along the way.

We walked through a small forest of trees and emerged at a lawn facing the Bay. We saw the Maori boat which seats over 100 paddlers and has an intricately carved side and end piece. 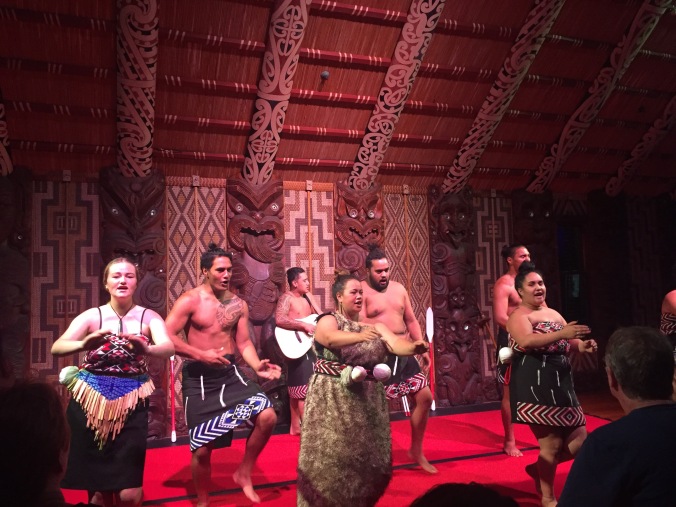 Seven smiling Maori people performed a dance and song show ending with a Haka. They became fierce. Just like the rugby players we try so hard to defeat.
Three hours later we left for Russell the small township opposite Paihia. It’s where Steve left for his 3km swim yesterday. We took a car ferry for $12.50 and drove through the green surrounds before arriving at the gorgeous little town of Russell. It had a bad reputation back in the 1800’s but is now a quiet beautiful bayside town. It has white painted wooden buildings along the road facing back to Paihai. It’s tree lined and has a lazy feel.

Our hotel, the Duke of Marlborough, is an old world place facing the water. It’s great. Our very cosy room is well appointed – we didn’t take a big room for just one night, so it’s small and cosy! But drinks on the veranda and dinner was great.

Our after dinner walk was peaceful and prepared us for the wonderfully comfortable bed.

I do love a short break holiday.

One thought on “Exploring the Bay of Islands”