A big city throws up challenges and one of them is sorting the public transport. As much as we love walking, the distances can be a killer. So we dutifully studied the maps and used some guides which suggested which buses , trolleys buses, trams and metro ran near the sights we want to visit. We also bought a 5 day travel pass. It just means we can travel on any means of transport as many times as we like. This is good for a new big city.

I’m also good at asking one of the visitor helpers or even the Police for help. In doing so we got across the river and up to the Palace in good time before the crowds. We saw the “informal changing of the guard”. Not quite Buckingham Palace but very good. 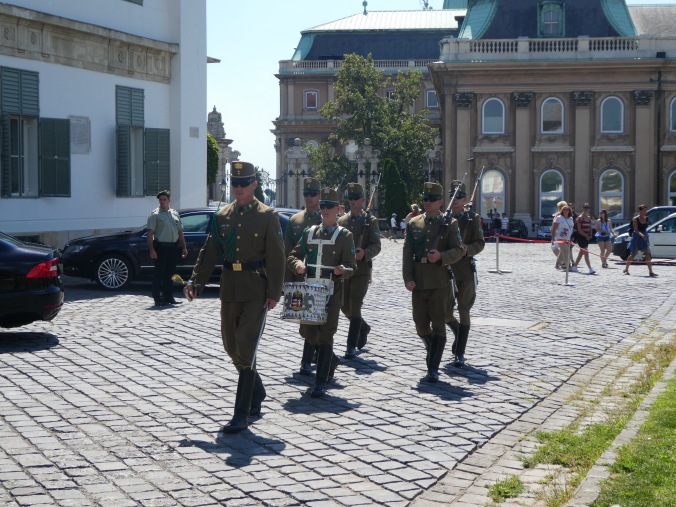 Then walked along in front of the rather huge Palace. It’s slowly being restored after earthquakes and bombing from the war and the views back across the river to Pest are wonderful.

We stopped for coffee with a view. This is how we manage to keep going all day. We have little breaks.

My rather bad attempt at a timed selfie!

We then  made it to St Matthias. A beautiful church which appears to be so huge outside but is more intimate inside. It’s heavily painted inside and has lovely ceramic tiles on the roof which had to be replaced after WW2. It was inside that we found out more about the crowning of Austrian Franz Josef as King and his beautiful wife Elizabeth as his Queen. The story is well told in the museum adjoining the church.   It was here I looked up and down. 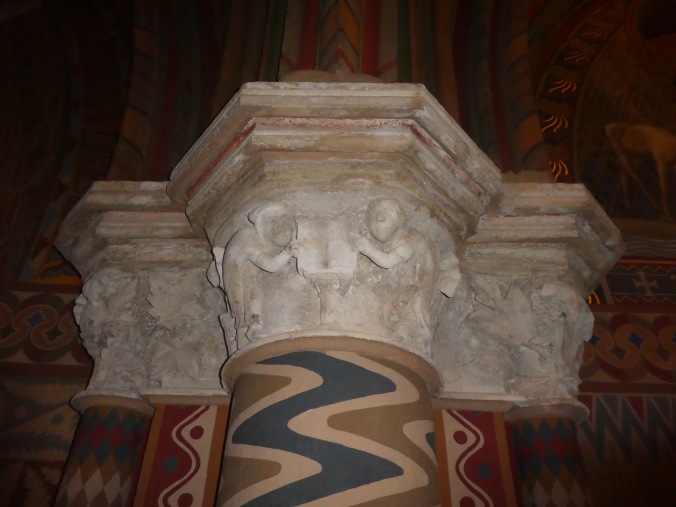 We walked along the wall called The Fishermens’ Bastion. It’s stunning with it turreted towers and beautifully restored stone work. 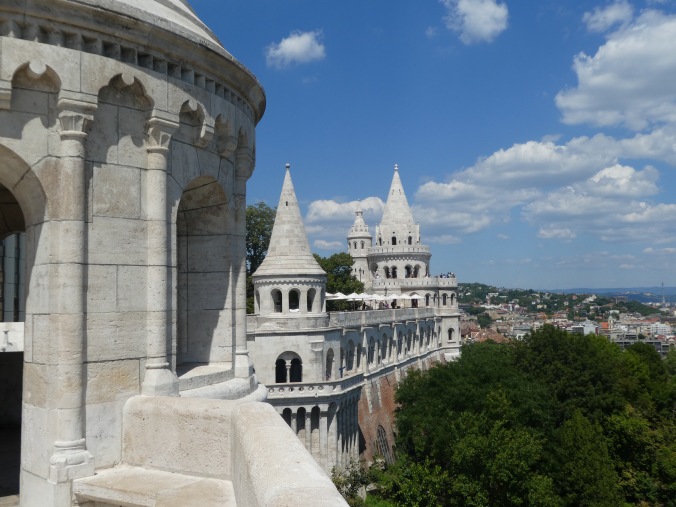 Then it was time for lunch sitting under  jaunty red umbrellas in a Parisian style cafe.

Steve was keen to go to the Hospital in the Rock. What a story. We had Timi as our guide and heard the story of the caves under the Palace Hill and how they were hollowed and used  as a Red Cross hospital during the war. Such great displays in the labyrinth of tunnels. They were also set up for a nuclear bomb in the 1950’s. The story touched on the bombs dropped on Japan during WW2 and how now we should understand the devastation this brings, and so – “No War”.

By now we had walked all around the hilltop known as Buda, so returned by bus to the river to visit our first of the Spas. Budapest is known as The City of Spas so we felt we had to start checking them out.

The baths of Budapest date back to the first century. Both Romans and Turkish influences can be seen. In the late 19th century the artisan wells were drilled to provide the thermal waters. So now Budapest boasts about having the largest number of spa thermal pools in Europe.

So we entered the St Gellert Thermal pools and went through the process of preparing our bodies for the variety of spas available! There are 4 outdoor thermal pools, several indoor spas and pools, an activity pool and various corridors of lockers and cabins and treatment rooms. It’s huge. And swimming costumes are required, so I wasn’t facing nude day like when I was in Baden Baden in Germany a few years ago!

We said goodbye to each other as we headed into the change rooms with our plastic wrist watch with a tag to be able to access a locker. Then it’s into the swimmers , have a shower and meet up again outside. It was quite crowded with people. Unfortunately I don’t have many  pictures. I had to leave my camera in the locker as I didn’t trust myself not to lose it outside.

These three I took of posters on the wall! It’s so over the top. We have nothing like it in Australia. 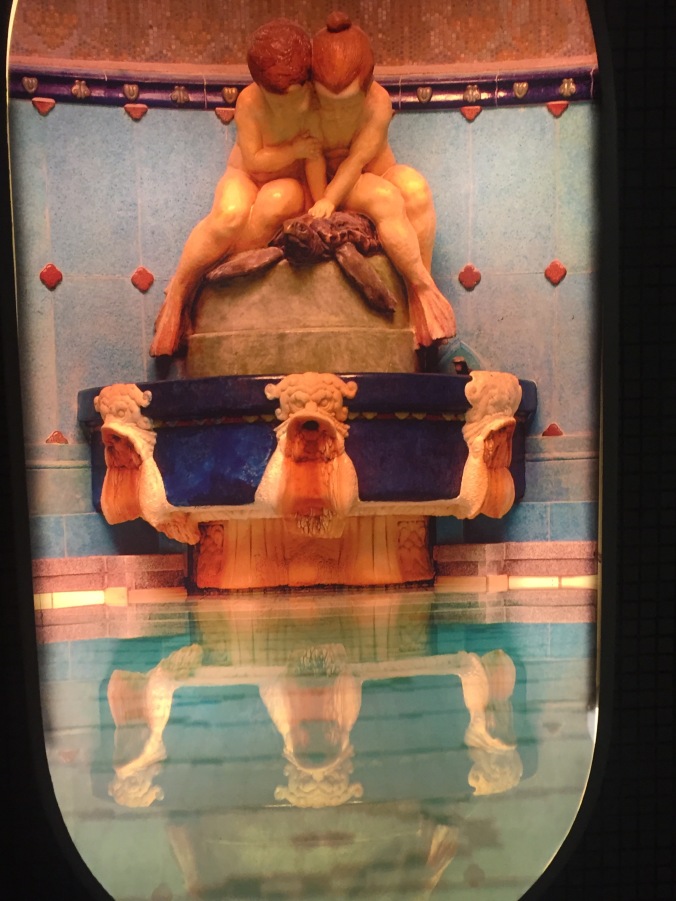 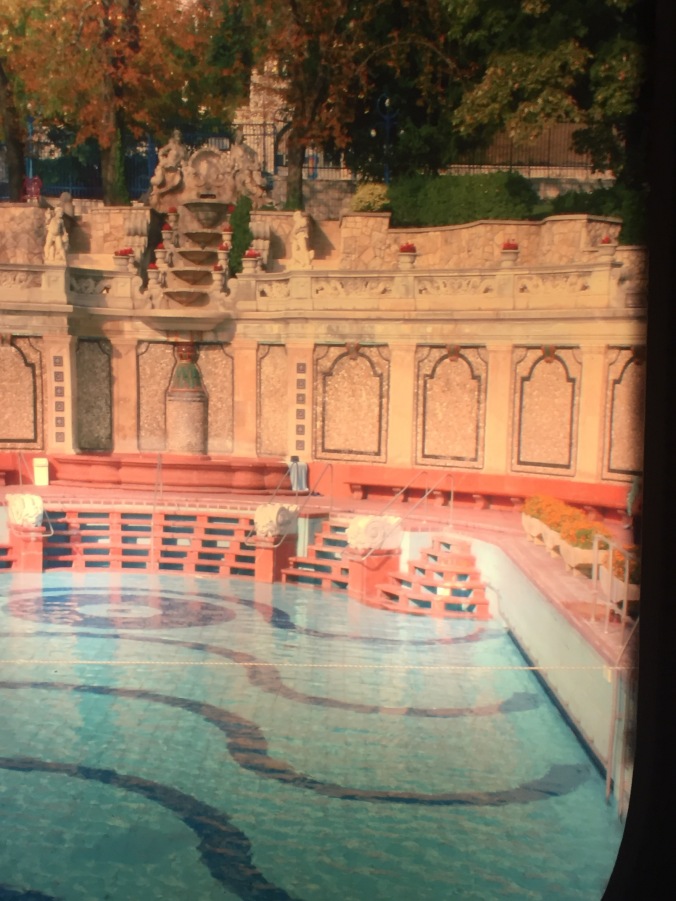 Our first pool was 36′ and we slipped in and found a step. It was wall to wall sitters. All in state of relaxation. We sat under a rather forceful shower which hammered at our necks and after awhile it proved to be relaxing. Then we took to the cool pool at 26′ so felt quite refreshed. Then we went to the indoor pools and wallowed a little more. We’d forgotten our bathing caps so couldn’t enter the ‘swimming pool’!

So for about 2 hours we relaxed and enjoyed and finished with a shower before returning to our apartment relaxed.

I’d recommend it ! And we’re doing it all again at another spa on Wednesday. 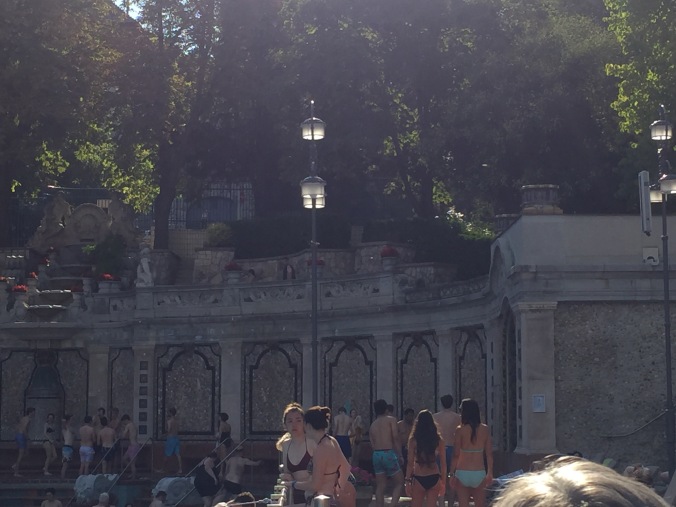 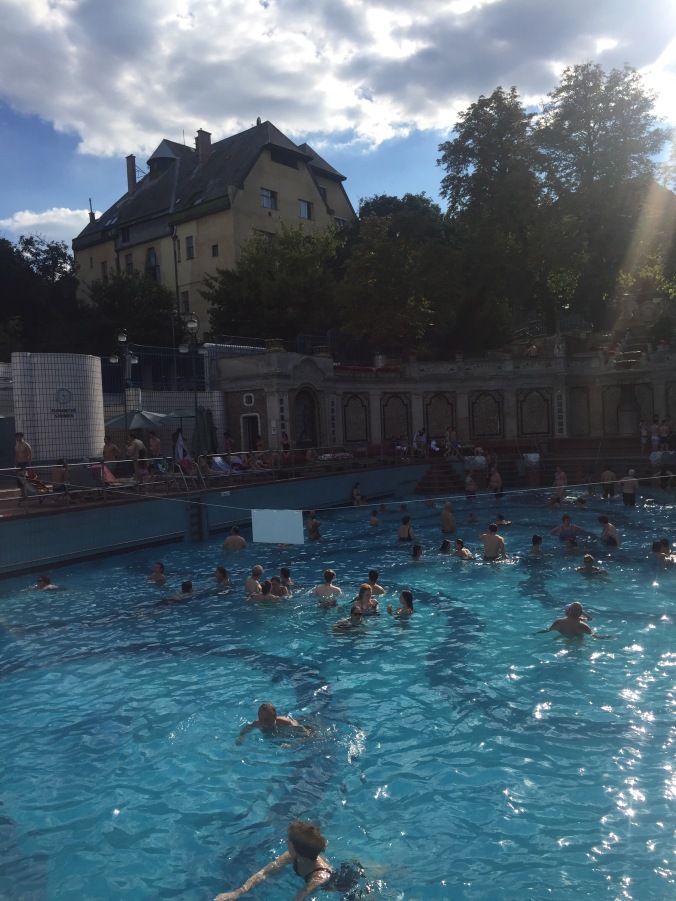 Train travel takes the hassle out of travelling to airports and gives some scenery along the way.

We walked from our Hotel Palace Zagreb two block down through the gardens to the train and caught the 10am to Budapest. No security lines, no hold ups, no crowds. We met a very nice American mother and daughter seated opposite us and got underway for the 4.5 hr journey. The countryside was green and the journey peaceful.

Sometimes we think the taxis waiting for tourists at airports and train stations are there just to rip us off! Our taxi driver had better English than some of the taxi drivers in Sydney and was so interesting telling us about the city. And we didn’t get ripped off! 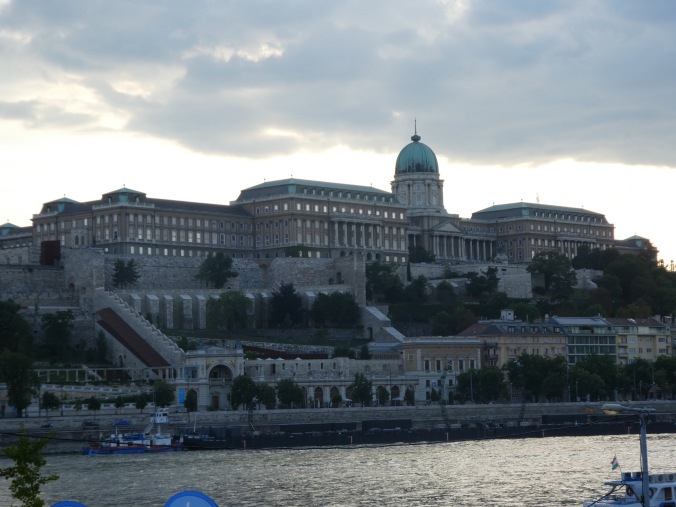 The Royal Palace is beyond grand. It’s now being restored and houses two museums.

The walk towards St Stephens Cathedral.

And here it is. St Stephens. We’re going there for a concert on Tuesday.

It’s quite ‘ summer in the city’  feel. Outdoor music, bars spilling over with people drinking beer and Aperol Spritz and watching the FINA water sports on big screen TVs.

We walked and walked into the evening to get orientated to this lovely city. The only disappointment is that the light rail runs along the river! You can get below it but it’s awkward. Pity, as the River  Danube is great.

The street sculptures and street art is always interesting and fun.

The city  is hosting the FINA World championships so there are lots of people around from a variety of countries. Somehow it doesn’t feel too crowded like Paris and Rome can feel. 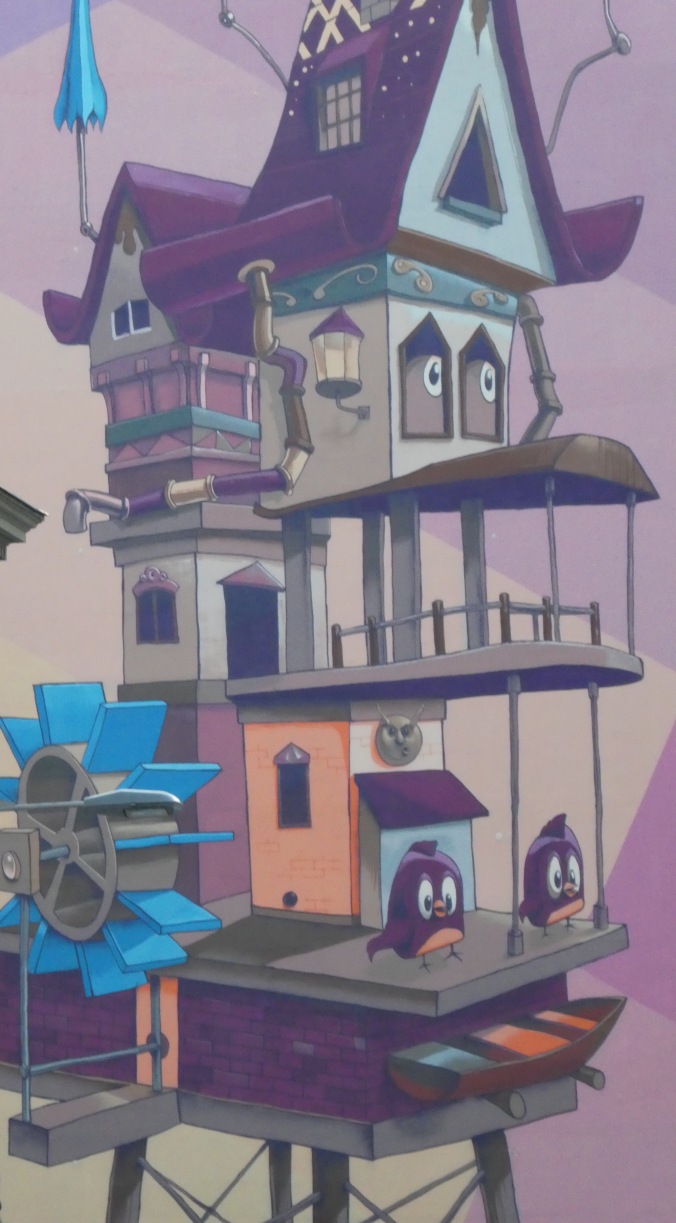 Painted on the side of a building. So cute.

After walking we rewarded ourselves with a beer in a beer garden opposite our house. Then feeling tired we decided to stay on for dinner.  We got back to the apartment and just enjoyed it. Caught up with the Tour de France and used the washing machine. When travelling it’s great to have a good apartment with a washing machine and an coffee machine! This is a beauty I found on air BnB.  It’s in a great area, has all the essentials including a lift and is so well decorated and fitted out. And it’s less than Aus $100 a night. Well done me! 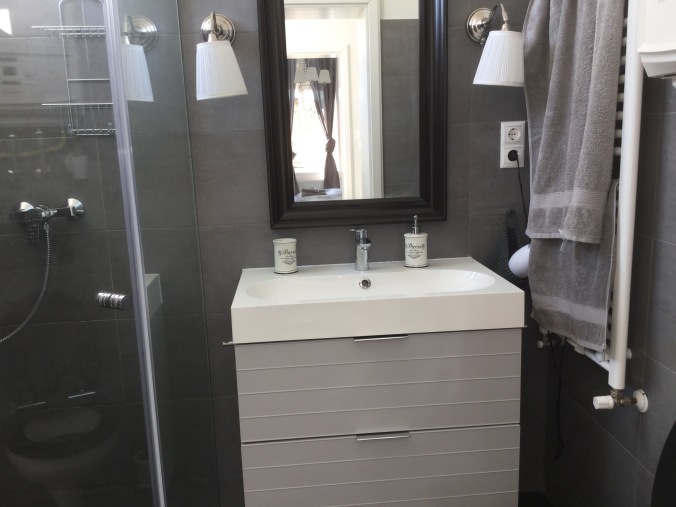 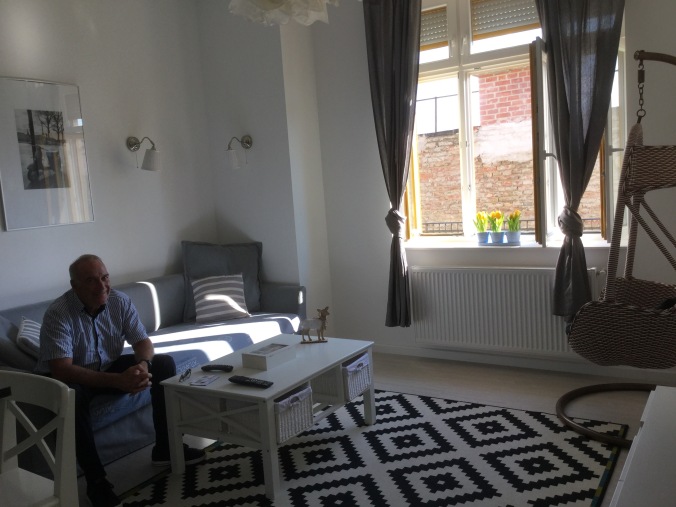 So we planned our day tomorrow. We’re going across the river to Buda to the Palace, the church of St Matthias and several other larger-than-life buildings. And this is a little of what we will see. 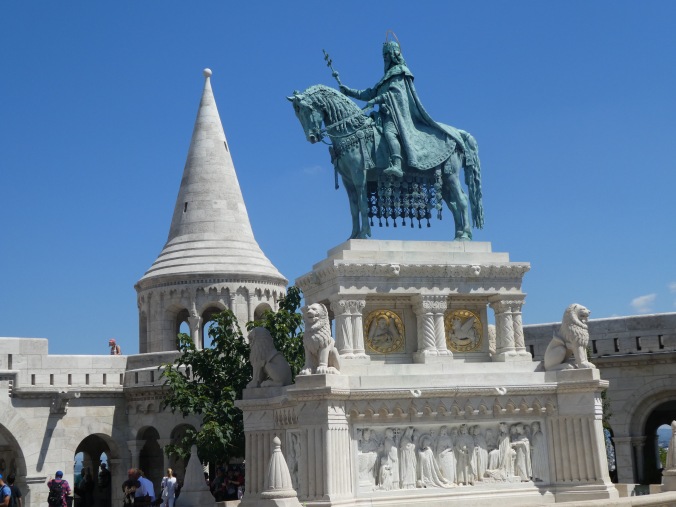