Around day 4 we all start to get a little tired ! Lots of swimming, sun, dinners out, talking , walking, not to mention the odd Gin & Tonic. It all adds up.

In fact, instead of Swim Trek, Ali and Helen call it Gin Trek! Love it.

Sensibly, Swim Trek have built in a rest half day. Knock us out with a big swim in the morning, great lunch, then an afternoon off.

Our goal today was to swim from Greece to Turkey. See the map above.

Looking out from Kas, in the distance you can see an island. It’s actually a Greek island and we are going to swim from it towards Kas. Two crossings from island to island then along the coast to a lighthouse. 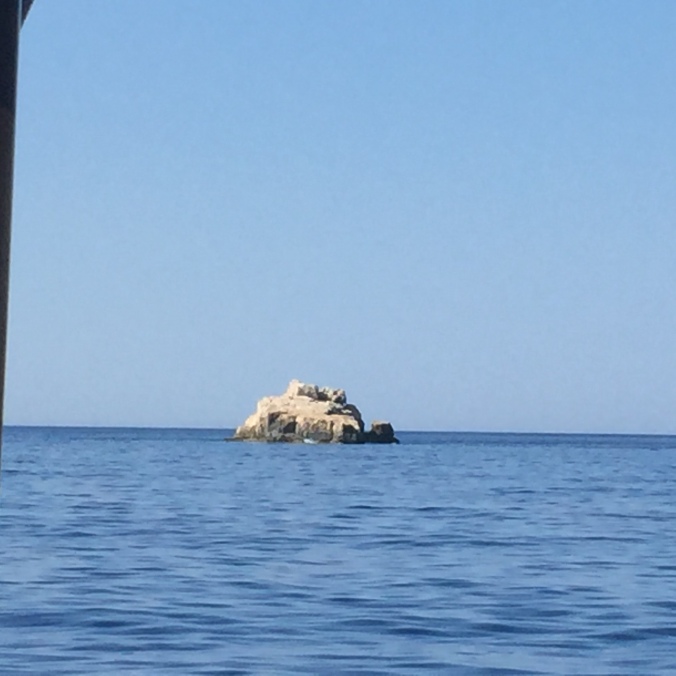 We set off at 8.30 and the conditions were perfect. Calm waters. Barely any chop. We motored across from Greece.

Pink group first, then the mighty orange group followed by the yellows ( the fast swimmers!) The idea is we all catch each other and finish together.

Off we went. We touched the rocks of Greece and set off. It was perfect.

The swim went according to plan and we all more or less finished together. What an exhilarating feeling.

But not everyone rested!

Free diver Diana gave B1 a lesson on how to free dive. She’s amazing in diving deep. Pam lost her googles overboard and Diana was the only one able to go deep enough to rescue them.

Today we had not only a beautiful lunch but a beer ! No swimming this afternoon. 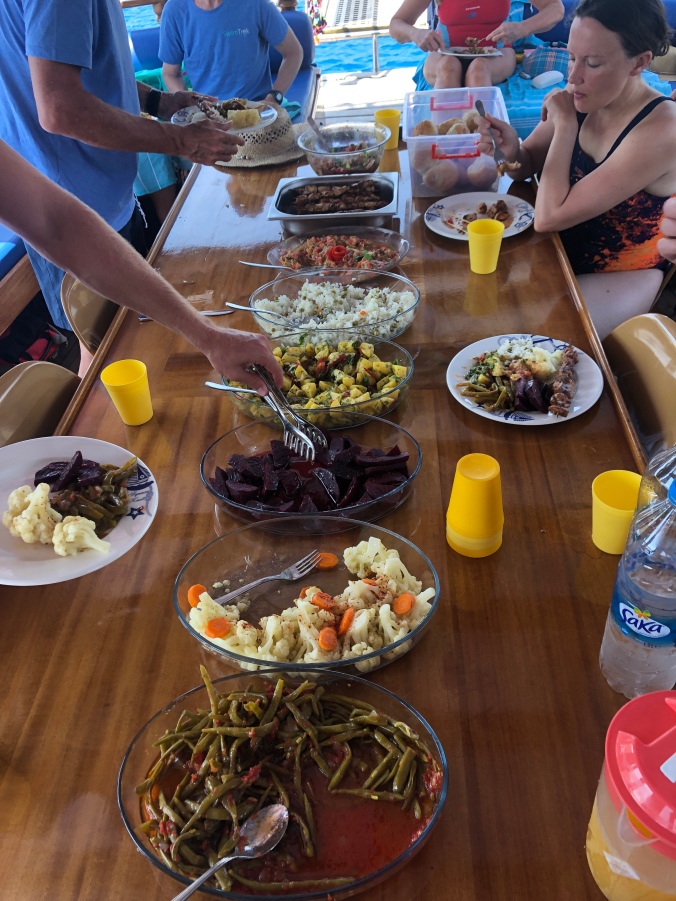 Eoin produced a brochure for a spa not far from the hotel. Who was going to have a Hamam? A Turkish spa treatment! Yes said 9 women.

Something to look forward to.

After arriving back at the Marina, Betty and I walked to the Friday markets. Good idea, until we got a little lost and walked further than we should in the searing heat. Finally we found it and were impressed by the variety of beautiful coloured fruits and vegetables.

I bought a Turkish towel and some Turkish delight and we made our way back to the hotel to prepare for our 3pm spa Hamam.

Four of us left together Sth African Pam, US Betty, Irish Noirin and myself. The others were coming later.

The spa was in a modern building near the marina. We were greeted and shown to the change room and then into the sauna wrapped in striped Turkish towels. Ten minutes was more than enough for me.

Next was the wash room. Two marble slabs awaited Pam and I. Onto the slab in the buff and the exfoliating began. She had on what looked like a pair of Brillo gloves. It was harsh! Then came the cream wash and lots of buckets of water. Next was the bubble treatment.

Not us! Photos from the brochure.

A large bag was filled with water and then swung around and emptied onto you until you were covered with bubbles. The massage continued until ……… I felt her grab my ankles and pull. Wow. I was as slippery as an eel and flew along the marble slab. I thought I’d end up on the floor. Then she pushed and back I flew the other way. This happened three times. I screamed I’m not sure why! But it was fun! And scary.

Next step was being helped up and sat next to the fountain and having containers of water sloshed over my head.

Next Pam & I were shuffled out under a bucket of icy water which was tipped all over us. Brrrr.

Recovery time on a lounge wrapped in a towel was a treat from the trauma.

Next up a great massage and face mask. Much more restful though she found my poor aching swimming muscles.

What an experience. When in Turkey try a Hamam. You will be refreshed and entertained all at once.

An hour of recovery time at the hotel before regrouping and heading off to a beach bar for dinner.