A friend suggested a visit to Bozcaada – an island about 2 hrs from Canakkale.

As we had arrived in Canakkale a day earlier than we were meant to, so decided to go. 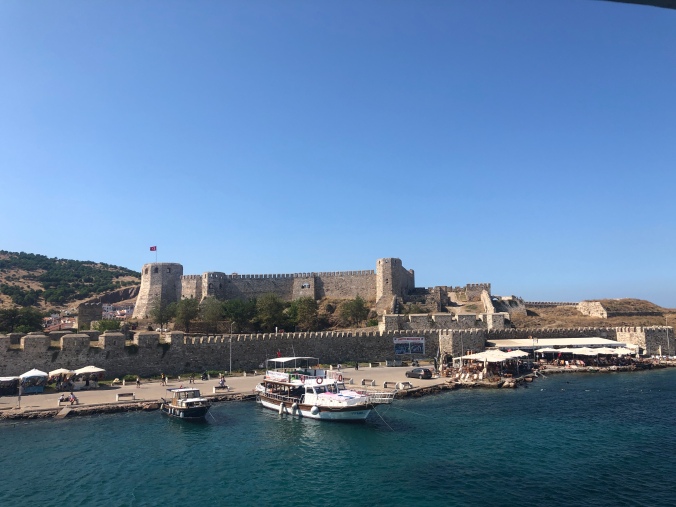 We caught the ferry down. We were told it took 1hr but it took 2hr. Mind you, it was pleasant sitting on the deck looking at the Gallipoli side of Turkey slip by. 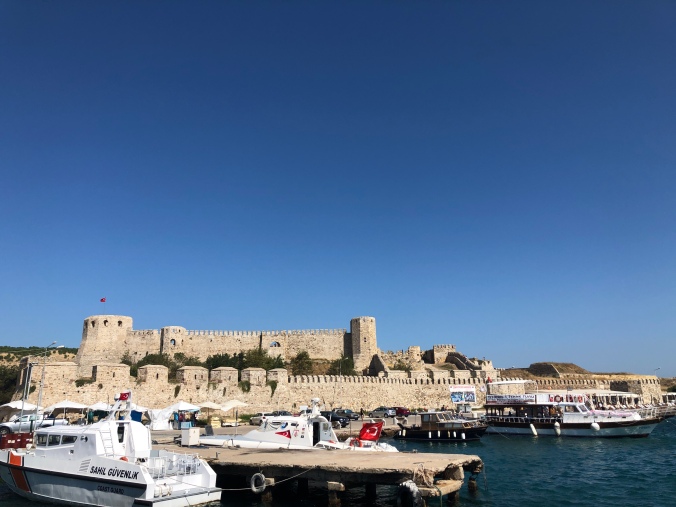 We arrived into a blue harbour dominated by a castle with a small beach area in front with lots of umbrellas and sun lounges. 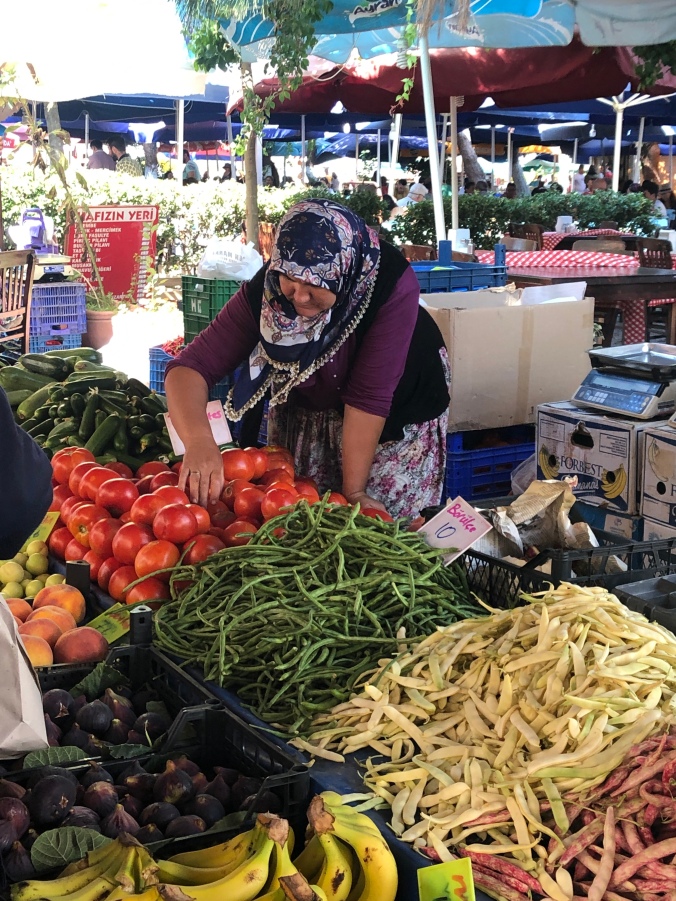 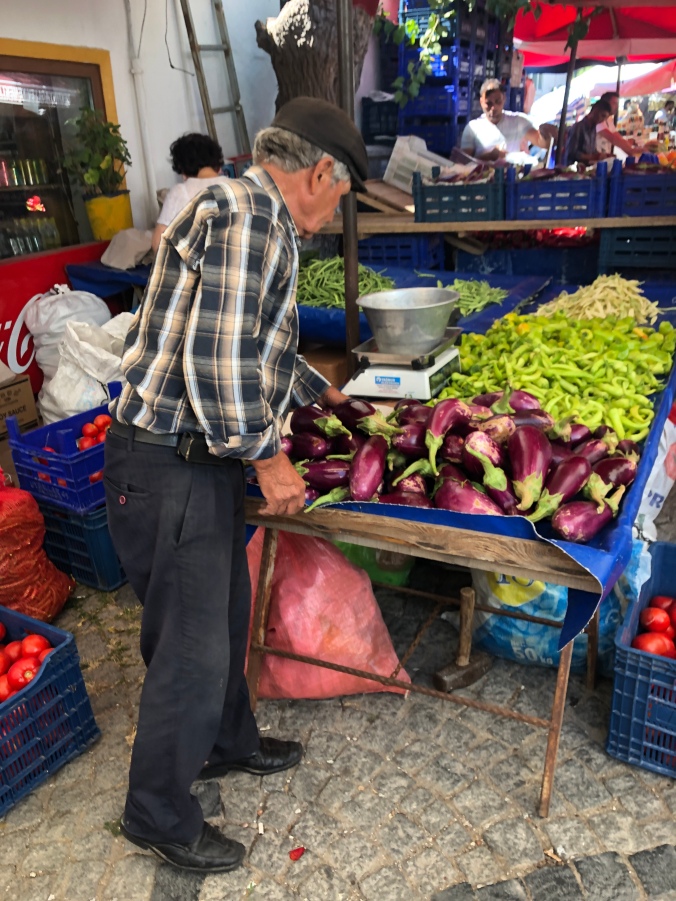 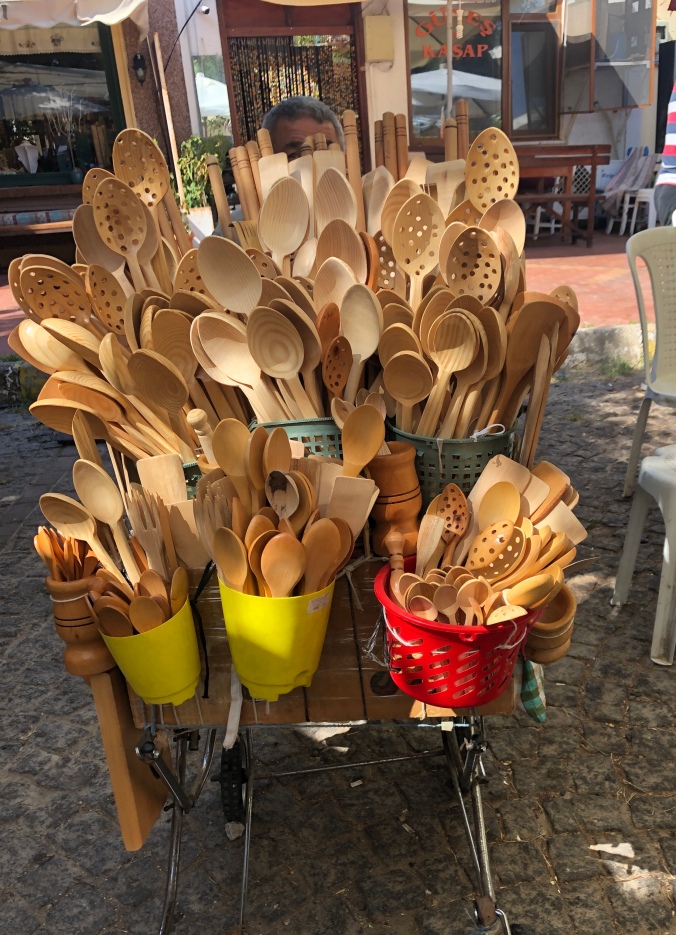 Making our way away from the harbour we found some local markets. I love markets in foreign countries. There are so many similarities but differences as well. Especially the cost! The tomatoes were about $1 a kilo. They looked magnificent.

The local crafts were beachy and not all mass produced and there was a very good book barn with its own cat sleeping amongst the books. 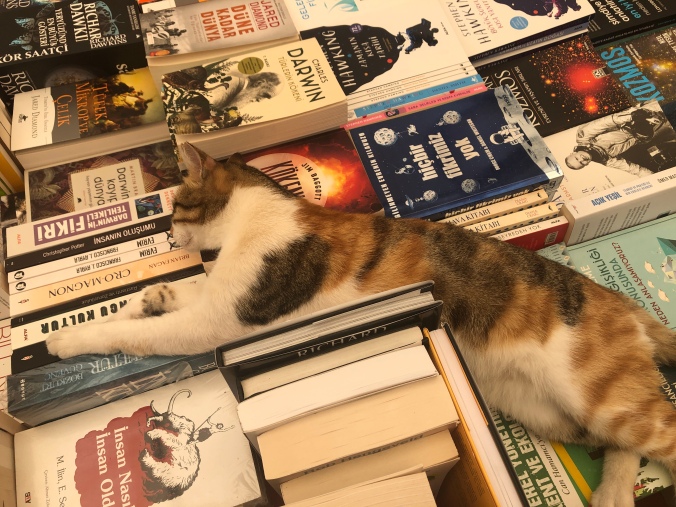 Coffee was under shady trees at the markets alongside lots of locals playing a version of Mahjong. We made our way up the leafy laneway and found some great restaurants, coffee shops, little boutiques and Greek style housing. 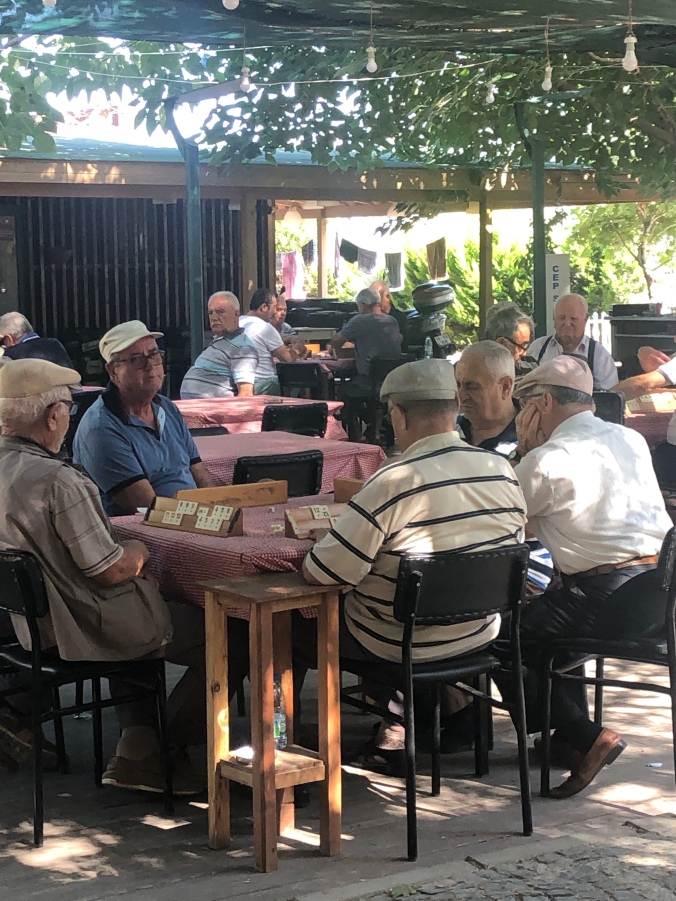 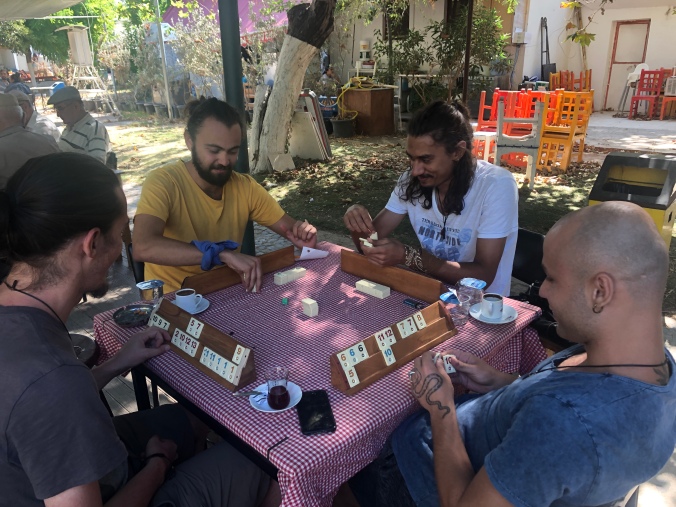 It was getting hot so we hailed a taksi and went to Asyama Bay. It’s water was aquamarine and soft sand was covered in little rattan umbrellas that swayed and bobbed in the breeze. 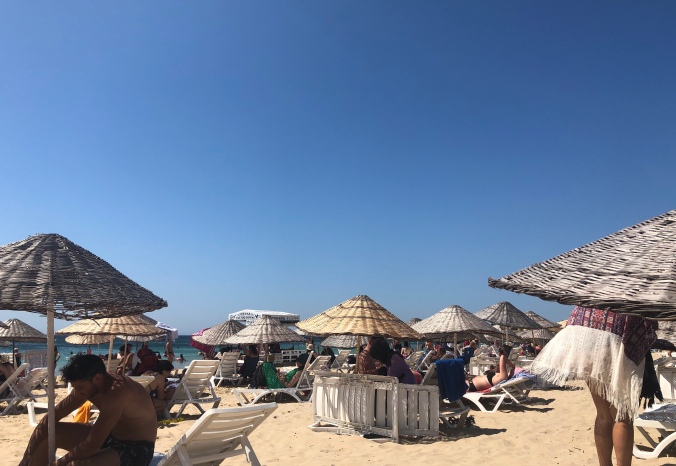 Renting an umbrella and two deck chairs for the day was 35TL – about $A8. There was also an excellent set up to have a shower and little cabins to change clothes. 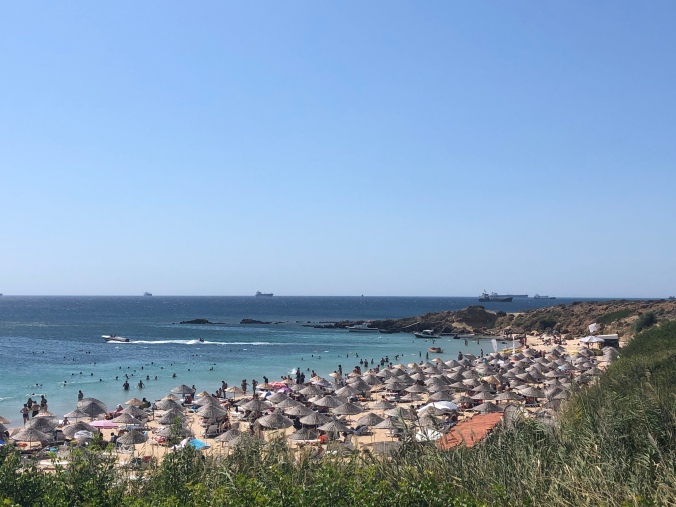 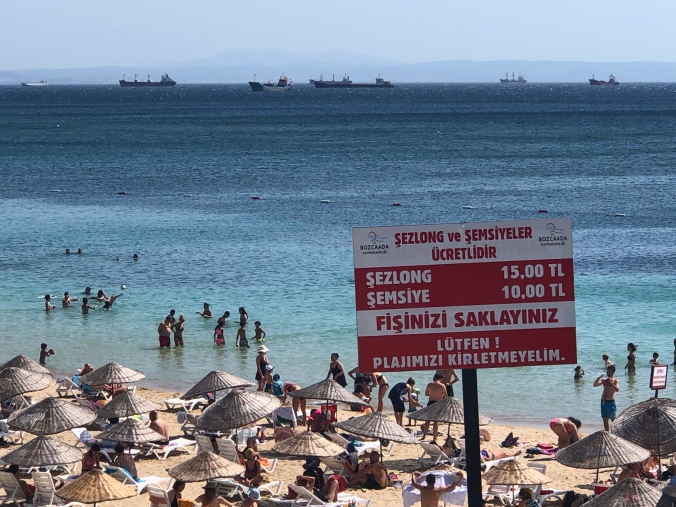 Swimming in relays so one of us could mind our bags, worked up an appetite so we chose one of the restaurants along the narrow road above the beach.

I had stuffed zucchini flowers and a green salad and Steve enjoyed kofta.

Back to the beach for more swimming and snoozing before heading back to the town for the ferry. There was just enough time for an ice cream. And to see another bride! 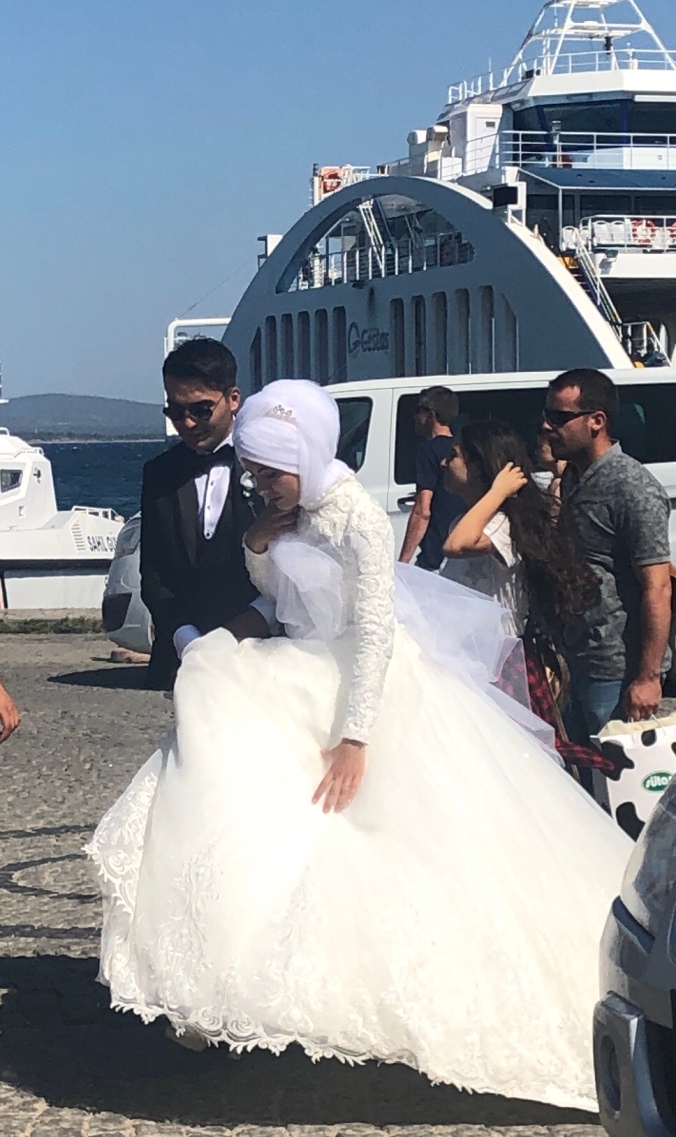 We got the free ferry across to the mainland – 1/2 hr. Then a small local bus back to Canakkale. It was quite long about 1.5hr but interesting as the locals hopped on and off with their shopping and we meandered through villages.

If going to Bozcaada perhaps go down on the ferry at 9am and back on the free ferry and bus. Unless they put on a fast ferry!

Our new swim trek friends Vanessa and George are at the same hotel. They’re swimming Hellespont as well. In fact Vanessa won her age group a few years ago.

We had some great Turkish food and then a beer on the roof top of our hotel looking out across the water they’ll be swimming across in two days time.

One thought on “Bozcaada : an island to visit”