Lovely and cool this morning as we walked to the train station on our way to the Skocjan Caves about an hour south west of Ljubljana. We’d heard these Caves were worth visiting so planned a day through the countryside to get to them.

What we didn’t plan was the train being changed to a bus. Not sure why. You don’t get too many explanations on matters of transport!

The bus proved to be considerably slower as we wound through the lush countryside. They don’t know the meaning of drought here in Slovenia. It’s green and well forested. 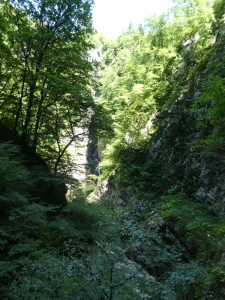 Outside the cave it was green and bright 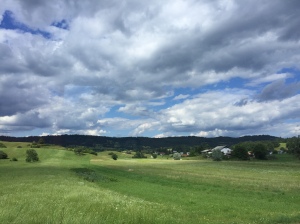 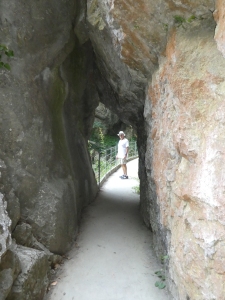 Steve outside the cave

The villages are reminiscent of German, Swiss or Austrian villages. They are neat and tidy with flowering window boxes on all the houses. They have well stacked woodpiles near each house – an early preparation for winter, well tended veggie patches and lots play equipment for the children.

I love Italy but must say the Slovenians are much neater. No rubbish by the roads. Just beautiful.

We arrived at the train station – in the bus – and had missed the shuttle to the caves.  A very kind young man named Bognor who was having a coffee in the station cafe insisted on driving us the 2 km to the caves. He also took along two young German girls who we had befriended from the bus. Such a kind young man. 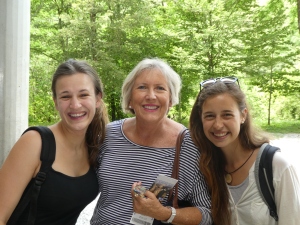 So by 1 pm we were ready for the walk through the caves. I was completely unprepared for the spectacle we were to see. It was magnificent, amazing  and not to be missed. These caves are Unesco listed and are grand and spectacular.

We were underground for about 2 hours walking through the various chambers and were completely knocked out by what we saw. Photos are prohibited and they wouldn’t do it justice anyway. We walked along the man-made concrete paths looking at the stalactites and stalagmites in the largest underground canyon in the world. Up and down we climbed. 500 steps as well as the long walkways winding up and around the chambers. We walked across a bridge about 100 metres underground and 100 metres above the river flowing through the cave. 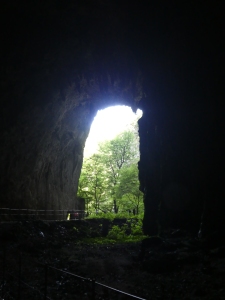 Please look up these caves and see some photos. I don’t have any to share.

After we arrived back in Ljubljana we celebrated our great day with  – you guessed -Aperol and a beer, then had a great dinner at Valvasor restaurant. Such beautiful food. Tempura asparagus followed by grilled tuna on a bed of vegetables and a delicious white wine Malvazija. Such a great day 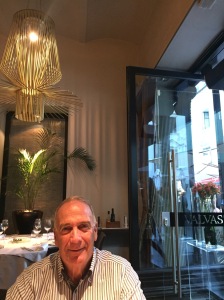 3 thoughts on “Under the green and in the caves of Slovenia.”