Today we went for the three P’s for a perfect day. Pool, Park, Parliament.

We started with the Pool. It’s been a while since Rob played waterpolo so we hardly know a person in the Australian team. But we decided to go and support them and relive some memories. We were thrilled to see Locky Hollis in the team. For those who know Rob you might remember the ‘Support Rob and Locky campaign’ when they were facing their cancer treatment. Today Locky scored 3 goals and looked terrific. Australia  are playing in the World Cup and faced France today. This was a good one to see as they won. 11-10. Not so good against Hungary two days ago.

This took us onto Margaret Island which we wanted to see. It’s an island that sits in the middle of the Danube between Buda and Pest. And it’s lovely. I’m so impressed with this city. After the waterpolo we toured the island in a little covered bicycle. These and assorted other bicycles, peddle cars, electric cars and mini trains can be hired from about $10 per half hour. 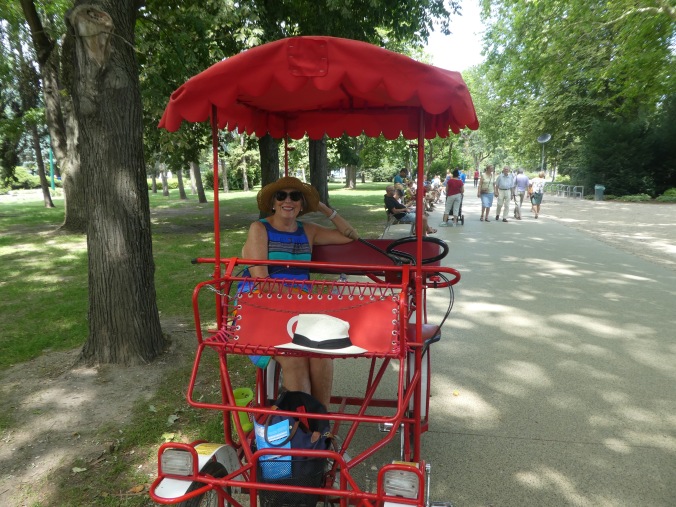 I did do some peddling!

The park has wonderful musical fountains , cycle paths, a rose garden, a Japanese garden, several swimming pools, a small children zoo with animals found in Hungary, a church, several restaurants and lots of shaded areas to walk or just rest. I loved it.

The musical fountain. So great to sit and watch. 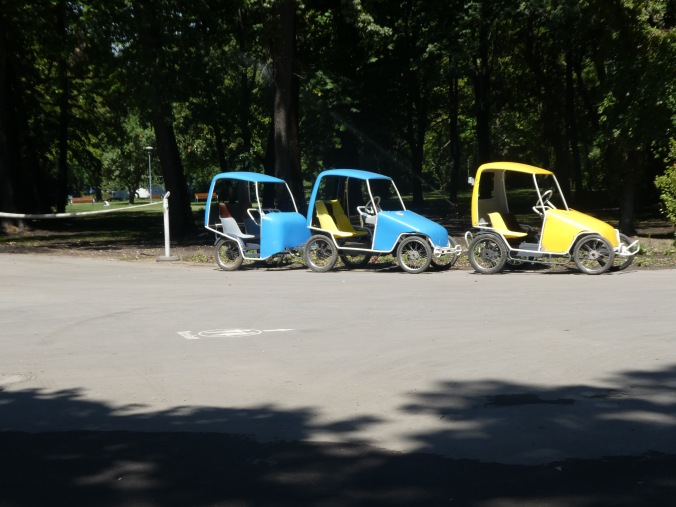 Steve would have rented one of these if he’d seen it first.

After exploring the park we headed  back over the bridge for lunch  (Goulash soup for Steve and tuna salad for me with two beers and a glass of Rose – about $40. ) and  a visit to Parliament (just under $A50). This building is amazing. They aren’t afraid of spending money to finance big buildings. We couldn’t get onto a tour until 5.15 so went wandering and returned later. If coming here, I suggest you jump online and book your tour ahead. 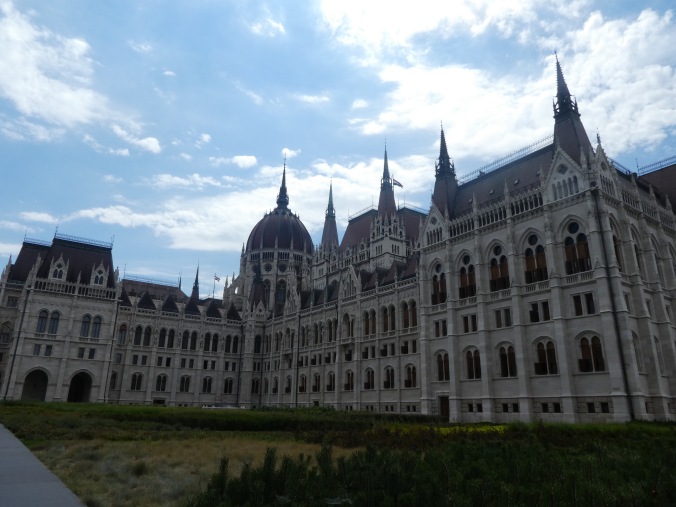 The sculptures I have mentioned before and I loved this one of Imre Nagy,  a former Prime Minister, standing on a sculptured bridge  gazing back towards Parliament. I just had to get alongside him and enjoy the view. 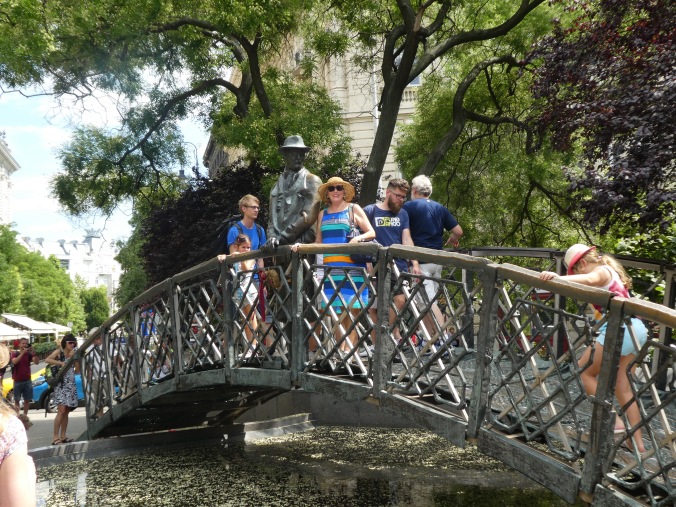 We wandered further and found some great spurting water features with children running through screaming with laughter. I wanted to run with them ! 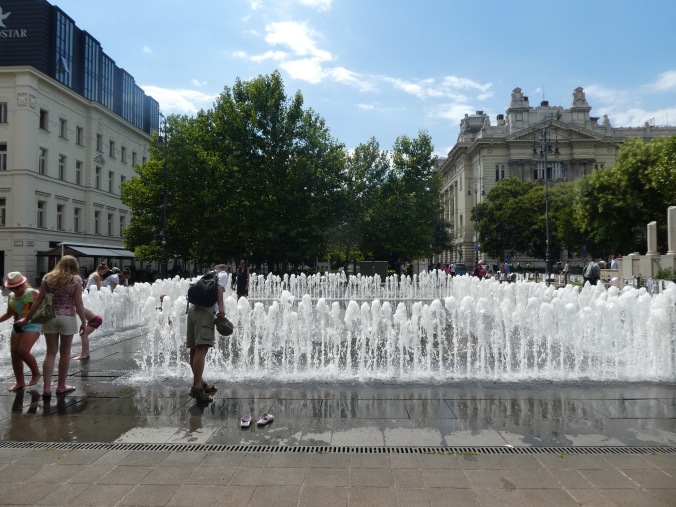 We returned later for the tour and it’s amazing inside the Parliament as well as outside.

Main Staircase. There are 196 rooms!

The Assembly where the Parliament meets.

This building was built after a competition for the architect with Imre Steindl the winner. It was started in  1885 and completed in 1904. It was damaged in the war but repaired and rebuilt. It’s stunning. The same architect also designed the Opera House which we visited yesterday.

From Parliament we went to Vaci  Street known as the shopping Street. Like many cities now, they have all the usual chain stores. From Dior to Mango, Ecco shoes  to H&M. Th world is getting smaller even in shopping terms.

So we retreated to  a people watching bar and ending up chatting to a New Zealander. He was an interesting man who had just been to his son’s wedding in Prague. His wife, a NZ politician, had returned home and he was continuing to holiday!

We had booked a river cruise at 9.30 so after our pre-dinner drinks we had quick street food from some vans in the square nearby and made our way to the boat.

I had read the  Legenda boats offered an hours trip including a drink for $45 a couple. I booked online and it proved to be a good idea. We got seats on the open air , top deck and it was great. There are cruises offering dinner but this would be a distraction to the sights.  Budapest by night is magical. 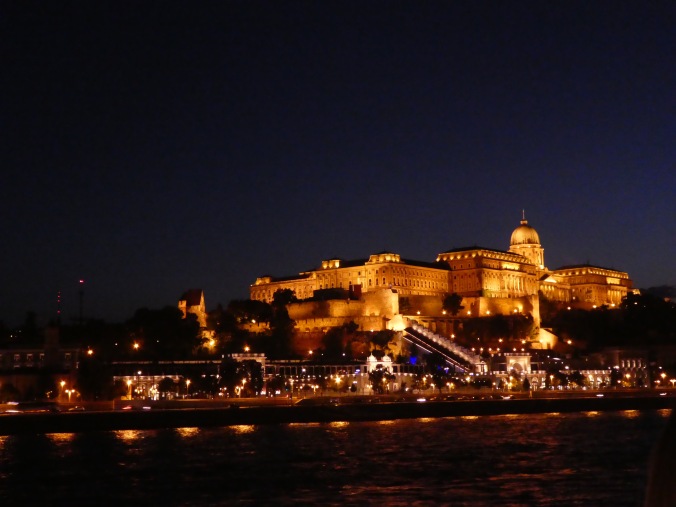 The Palace by night

So ended another great day in Budapest.

7 thoughts on “Pools, Parks and Parliament”