We slept well but the call to prayer at 5am and the local roosters crowing made it an early start.

Breakfast of ripe tomatoes, an egg and delicious fruits in the lovely garden was a good start to our day. It’s such a healthy breakfast.

We got a ‘taksi’ to the top gate and started our tour. We decided we wanted to move at our own pace and had an audio guide – which is always a good way to go.

Amazing view of the ancient city

There were a few tour groups there but not enough to bother us. It got very hot as we moved around so we hovered like cows under any available tree as we listened to history being brought alive. 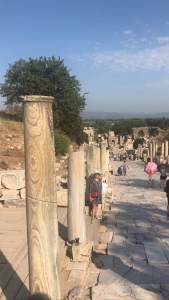 What a story is Ephesus. It’s truly amazing to see. The Temple in Agrigento Sicily was great, as are the Roman forum, the Parthenon, Pompeii – but this is altogether amazing. A walled city being rediscovered. The way people lived was described and you could see evidence of the houses, the spa, the latrines, shops, library, amphitheatre, workshops. Everything.

This was one of the most important cities of the ancient world. It was on the Silk Road which made trade so important. It was ruled by Roman, Greek, Byzantine and taken by the Arabs who destroyed it.

We walked for around 2 hours and exited along the promenade of trees to the car park.

Back to Selcuk and the bus station to plan our trip to Canakkale tomorrow when sadly Betty leaves us. It’s been wonderful having her along on this swim trek adventure but she’s heading home to LA.

We returned to yesterday’s restaurant for lunch as it was so good.

Then the Ephesus museum gave respite against the middle of the day heat. It’s a wonderfully curated museum with many examples of the items people of Ephesus used in everyday life – pottery bowls, utensils, weapons, coins along with statues and busts of famous people. 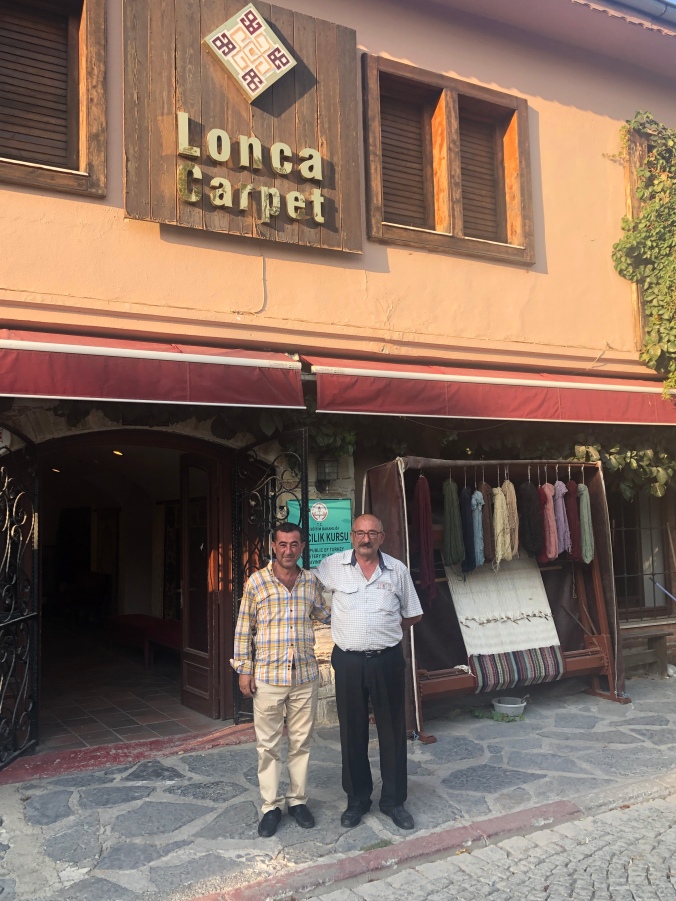 The carpet men of Selçuk.

Walking back to our hotel we passed a carpet Emporium. It looked good and quiet so we went in and met a very nice man who explained the techniques of weaving – .they are keeping these traditional ways of weaving alive as they are a centre for weaving workshops. It was so interesting.

We got talking about styles – Kilams, wool on wool, wool and cotton, silk.

I started thinking about our house and where I could put a Turkish rug. We have one already but to buy a beautiful one here and get the story would be special.

Betty has a kilam hanging on her wall at home. She’d bought it for $US259. She had a photo of it and the master historian was able to explain the meaning behind the symbols.

We ending up loving a hall runner. It has stripes, running water and tree houses – which really appealed as Steve is about to build one for Oliver! It also has tied off fringing which indicates it’s a dowry rug.

So we bought it – to be shipped home. Hopefully it arrives. But I did feel confident. The men were not at all pushy. – not like when we’d been in Istanbul! We accepted their hospitality and had drink with them.

We had another BBQ in the garden at Paradise. Such a great day, our last with my wing woman Betty.

2 thoughts on “Ephesus: a look back into the past.”