What a day. We got to Mark and Lauren Chisholm’s house by 2 pm, for a meet and greet and the odd glass of champagne. Lauren has her sister, brother in law and their 2 children staying from London. Also her brother from Australia, his American wife and their 2 children. Her sister and her new husband ( another Rugby player with the Force) Her parents Bill and Lynne Campbell ( also a former Wallaby) sensibly choose to stay at the beautiful Palace Hotel in Biarritz. We met Lauren and Mark’s 5 children who are all adorable and toured their lovely big French house.

Today was like being in the land of the Giants. Wherever we went in Bayonne people stared! Bill Campbell is huge and then there is Mark 6’6, his two brothers’ in law both 6’5 and another brother in law small at 6.1! Poor Steve!

Bayonne was awash in red and white and the whole Fete was like the Ekka, the Royal Easter Show, Expo, the running of the Bulls, a huge pop concert all rolled into one city! People were friendly and chatty. Everyone was having fun dancing, drinking yes, but not to excess ( except maybe for our little group who were trying hard!)
We had a long lunch that started at 3 and ended I’m not sure when. Then we walked around the city and looked at dancing, a band, some singing and did a bit of bar hopping. After awhile the “oldies” decided to pull the plug and head for home. However party boy Bill stayed behind with the kids.

We got back to the hotel round 10 and Steve has hit the bed already. 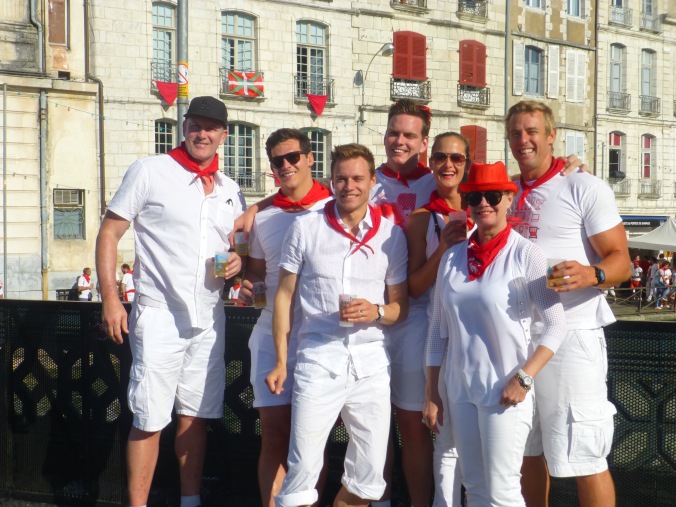 One thought on “What a day : Saturday”