Woke late to the sounds in the Mairie outside my window. Today was spring cleaning day in the Place.

There were sweepers sweeping and waterers watering and Policemen coming and going from the Council Offices in the Mairie.

I took the opportunity to put my head inside this Council  building that always seems so closed up. It was rather lovely.

Staircase inside the Council’s Mairie building.

Susanna, the fun lady who manages the Brannocks house for the group of owners, happens to be on the council, so had asked could she call in for a chat before the meeting.

Margaret and I went for coffee beforehand at the lovely cafe opposite. It’s such a special little place and holds special memories as I’ve eaten there each visit I’ve had and love the little outdoor terrace.

It’s the cafe behind the flags!

I wanted to wander the streets of the village one last ( well almost last) time.

I saw so many things this morning , afternoon and evening. You would love it.

We walked down past Bar Marigny and  saw the crowd that hang out there. They nodded. Or called Bojour as  we we passed by.  We went to a little shop at the end  of town near the Happy Tree – which has the cutest felt stars hanging in it.

The little boutique has lot of clothes and there was  a mother with three daughters trying things on and looking great in everything. There are quite a few Norwegians and Swedish staying in the area. In fact someone commented that they are ‘very big and take up lots of space in the cafes in their big groups  with lots  of children!’

Margaret and I descended to the cave below with its cushions,  lamps,, bolts of fabric,  glassware, beads and a cupboard of clothes, Tout –  50%.  That sounded good. So after much wriggling in the little dressing room I bought a lovely mustard  linen top. 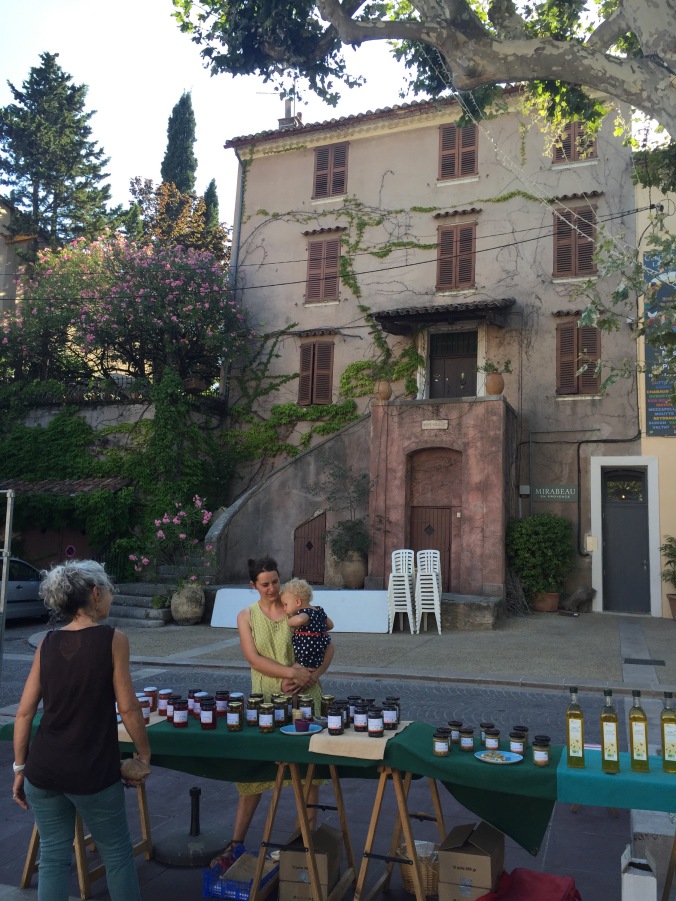 Back out side we walked along the Grand Rue,  past Mirabeau where I bought some wine to thank John  and Margaret for  having me and to wish them a happy joint70. They have friends arriving in Sept for a cruise then a stay in Cotignac to celebrate.

Then it was a general wander and observation of the locals and the tourists. This village is beautiful and it’s becoming a little seasonal with the tourists. It’s a shame for the locals if they find the work so seasonal they have to move away in winter. 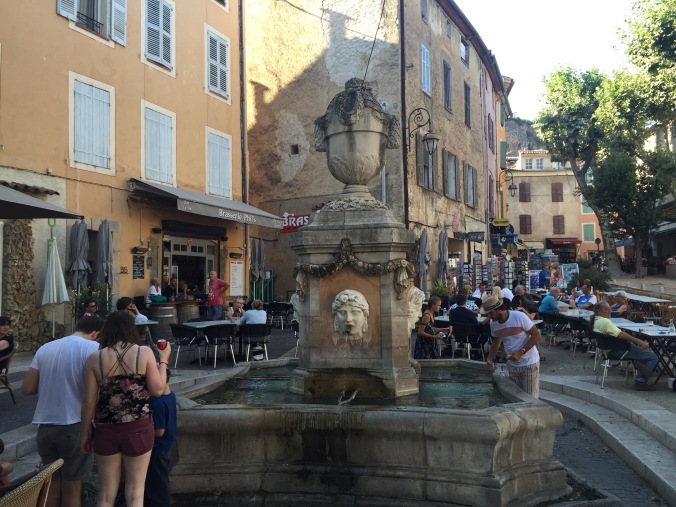 We sat in a  cafe by the four seasons fountain and watched a drama  unfold.

A young woman driving a small car suddenly stopped and jumped out. Her large dong sitting on the front seat saw a likely playmate. Another big dog. So he leapt out of the window.

She left the car,  with about 5 people waiting patiently behind  her and took off after the dog. He was in dog heaven. Now he had two playmates. He chased the dog and she chased him. There were calls from the crowds , waves from all,   until a young man grabbed her dog. She carried him back to her car – now really blocking the narrow street and dumped him in the front seat. She hurried around to the drivers side to calls of ‘ wind your window up!’ She did, she waved and drove off with the dog looking out from his view on the front seat. Drama over. 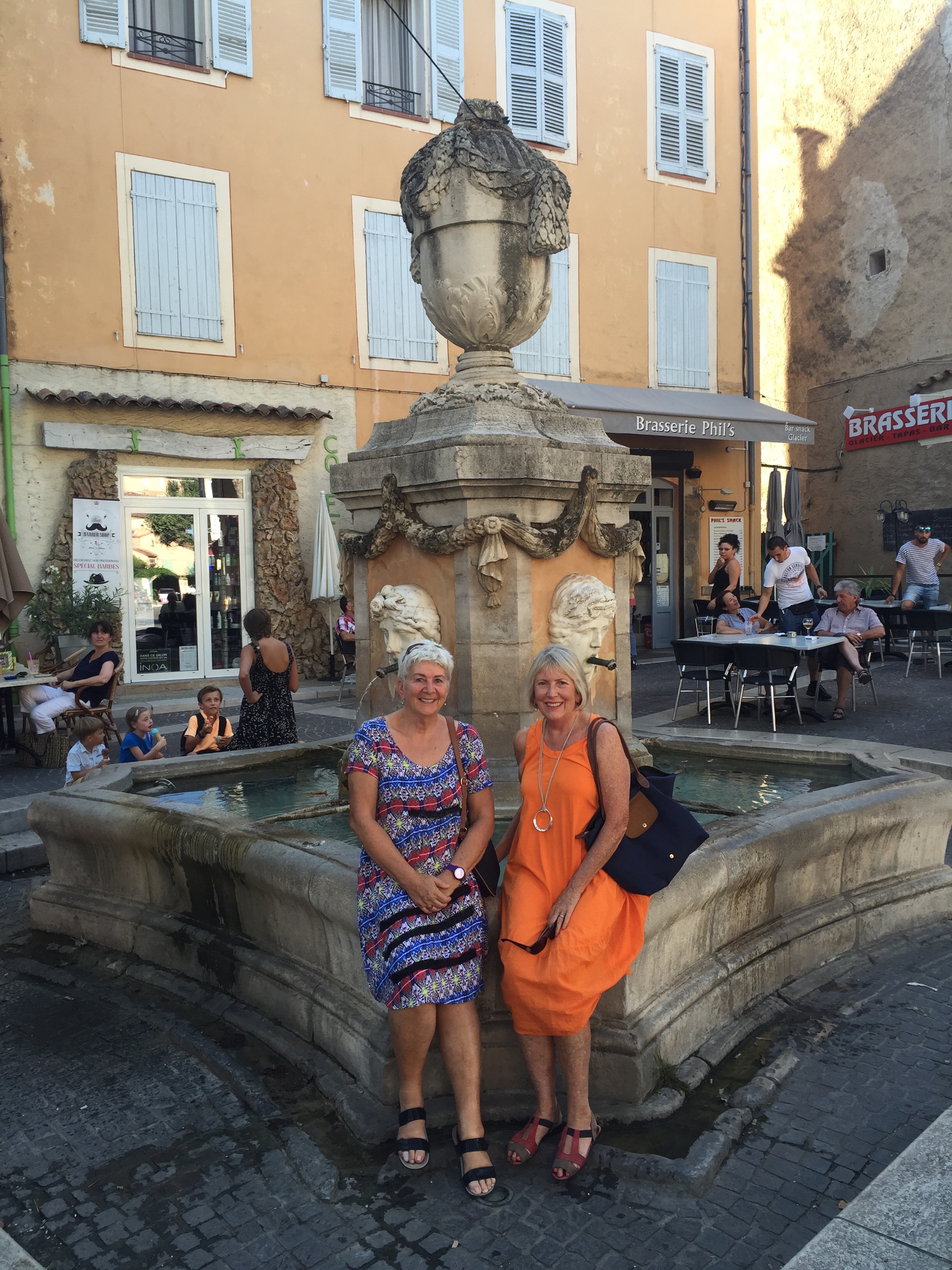 Sitting by the 4 seasons fountain

We saw tables being put along on the road then realised the road was to be closed. There must be a party tonight. We’ll have to come back.

After siesta we moved our aperitif hour to outside the house. It’s a great spot to watch the world go by or to catch up with neighbours as we did. 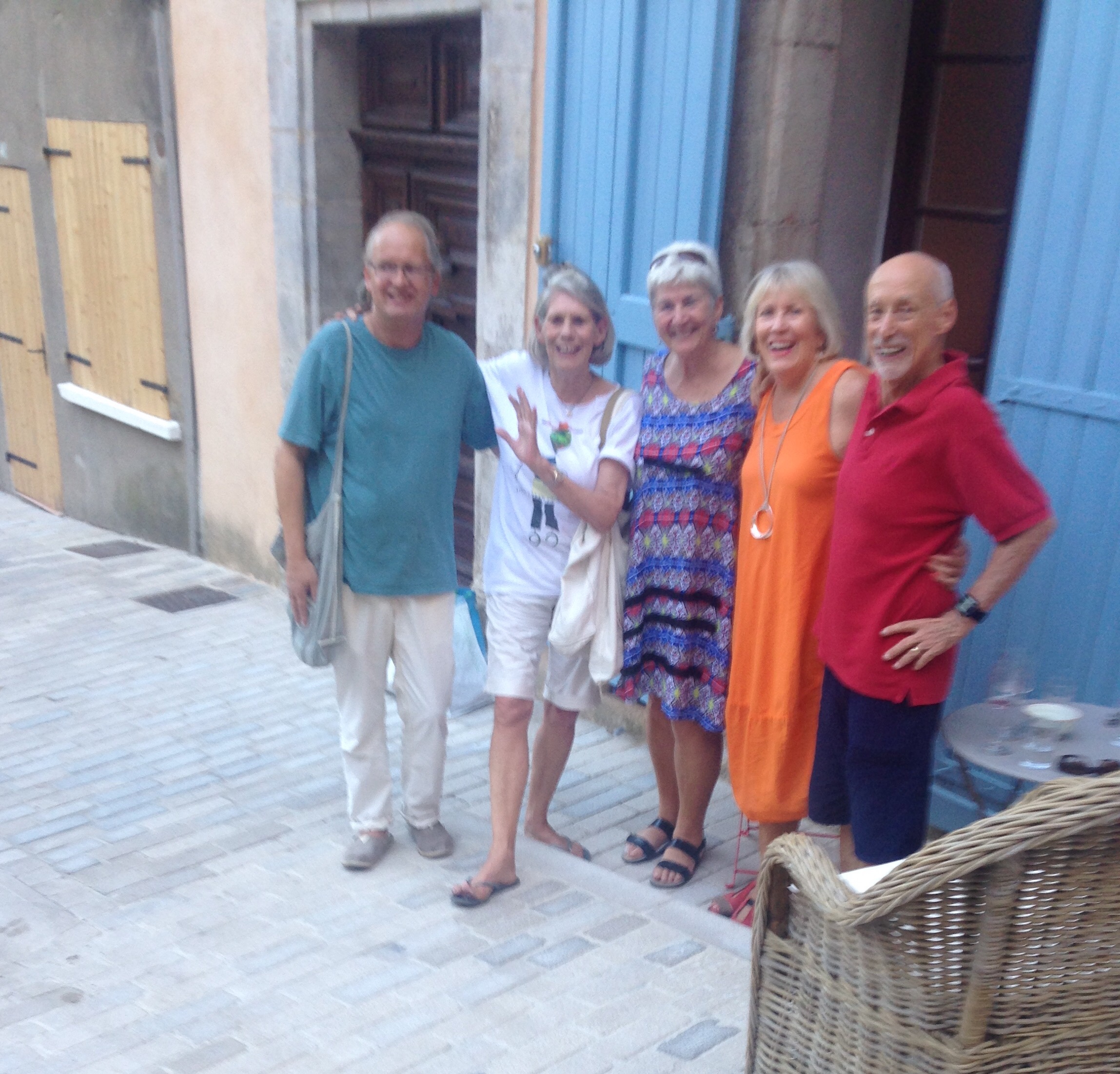 We just had to go back to the Grand Rue later that evening to check out the events. And there  they were,  dancing in the streets. There was a disc jockey spinning lots of favourites and the dances moved from line dancing to waltzing to swing to modern bopping and the old favourite YMCA. Young, old, big and small. All together. It was such a festive occasion.

Even the gorgeous dark haired girl from the cafe – with the  amazing smile , got up and danced with her mum between serving drinks.

It gave a taste of summer in a village. It was great fun.

Try and get here I can promise you’d love it.