We docked at 8 and got through customs and got Fangio in a taxi to Avis at the airport. For normal drivers it would be 20 min. For us and our curly haired, spectacle wearing Fangio it was 10 mins. As he drove with one arm out the window he intermittently brought it in to straighten his curls at one time doing 120 kmh in a 70 zone!

Welcome to Italy! Everyone is so friendly , even when things don’t work.

After exploring the city centre and the rather impressive large public buildings of Bari we drove south.

I had booked a table at Grotto Palazzese,  a rather special restaurant,  built into the cliffs overlooking the sea at Polignano.

We drove along the coast and looked at the Italians setting up their umbrellas and deck chairs on the public beaches. It’s good to see its not all controlled by the big hotels where you have to rent a chair and umbrella. So far these beaches are free. And crowded.

Polignano is a lovely seaside place with high cliffs and just a few places to access the sea. We walked through the old town before arriving at our restaurant, perched high on the cliff top. But looking over the edge at the viewing point we could see the tables set below the level we were at.

There is a dress code for this upmarket place and I had Steve’s long pants in my bag just in case!!!!!. He wore his blue linen shorts and a nice navy shirt. He looked good, so we wondered if he would be rejected😕 or if it was an evening dress code.

So in we went and were greeted at the front door and told to proceed down the 100 steps to the restaurant. When we made it down and stepped out into the space it was magnificent. The water below so clear and blue. We were given a table by the railing and felt great.

As it turns out some very underdressed people were admitted included a lady who looked like she was wearing exercise gear! Tacky 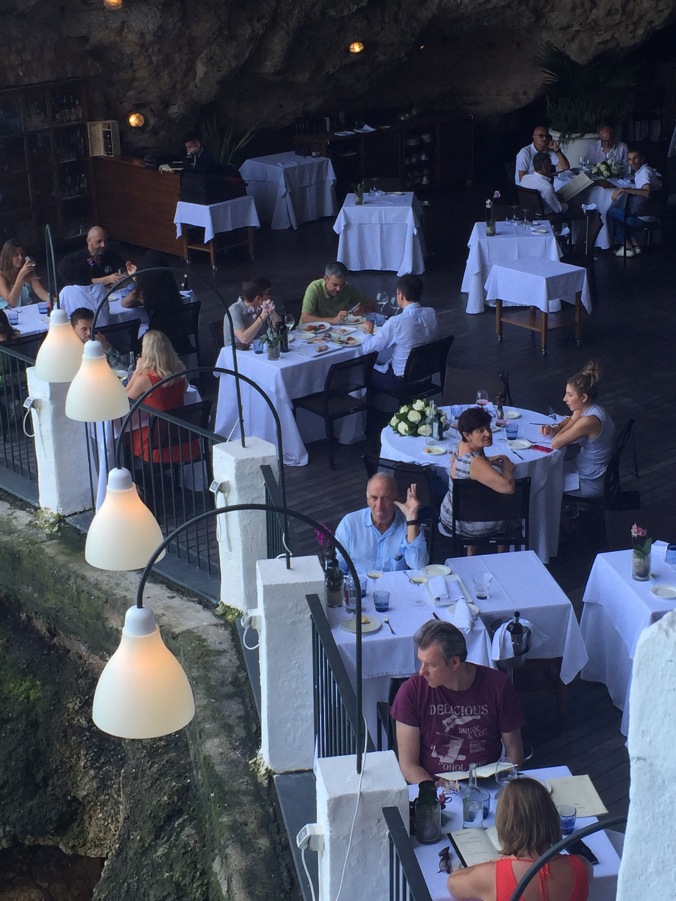 We proceeded to eat great food and share some wine and toasted our successful swim trek, ie : we both were happy with our swims, we scooped the prizes and were the eldest there by quite a few years but managed to keep up!

I had stuffed zucchini flowers followed by char grilled squid. Steve had scampi followed by a hot smoked salmon that had him licking his lips. We were very bad and had dessert. Ice cream for me and tiramisu for Steve.

A very happy me. 😃🍸 – and Steve’s cute glass of Campari and soda! 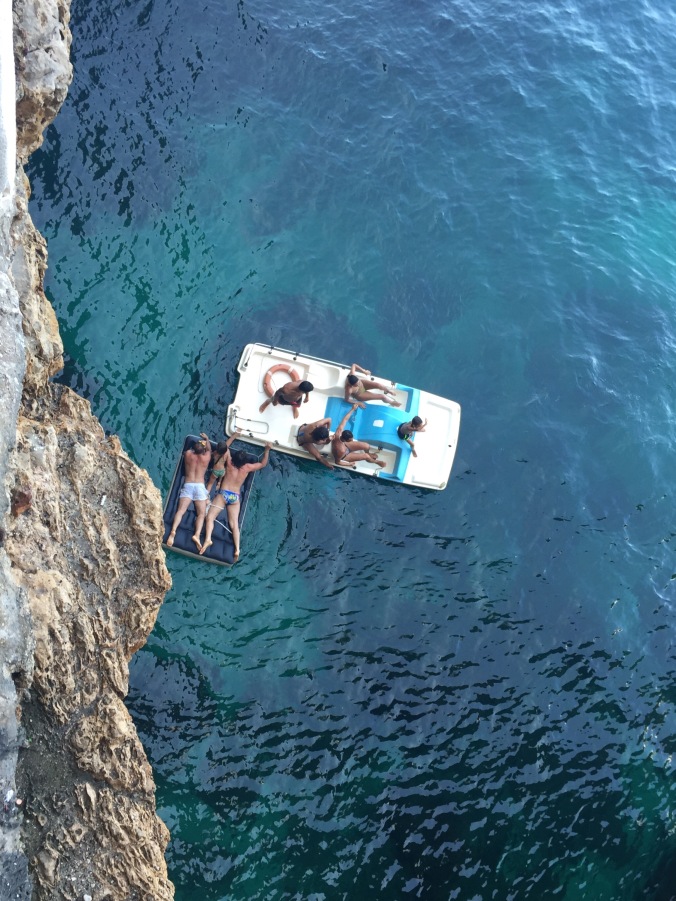 Looking straight down from our table

We left feeling pleasantly full and arrived at a piazza to see the final touches being put to the flowers on a church for a wedding that afternoon. I couldn’t resist waiting to watch because if the glorious flowers were anything to go by then it would be a well dressed wedding group. Which would be in  contrast to one we’d seen in Bari this morning – which was nice but slightly overdone! Dresses too short, heels too shiney and way too high

We waited  and the guests started to arrive by limo and small bus. To paint the picture – it was 4 pm and stinking hot! The ladies were mostly wear long floaty dresses with various degrees of suntan. The men in dark suits working up a glossy sweat. Someone told me it was an English girl marrying an Italian man. And there must have been money somewhere. 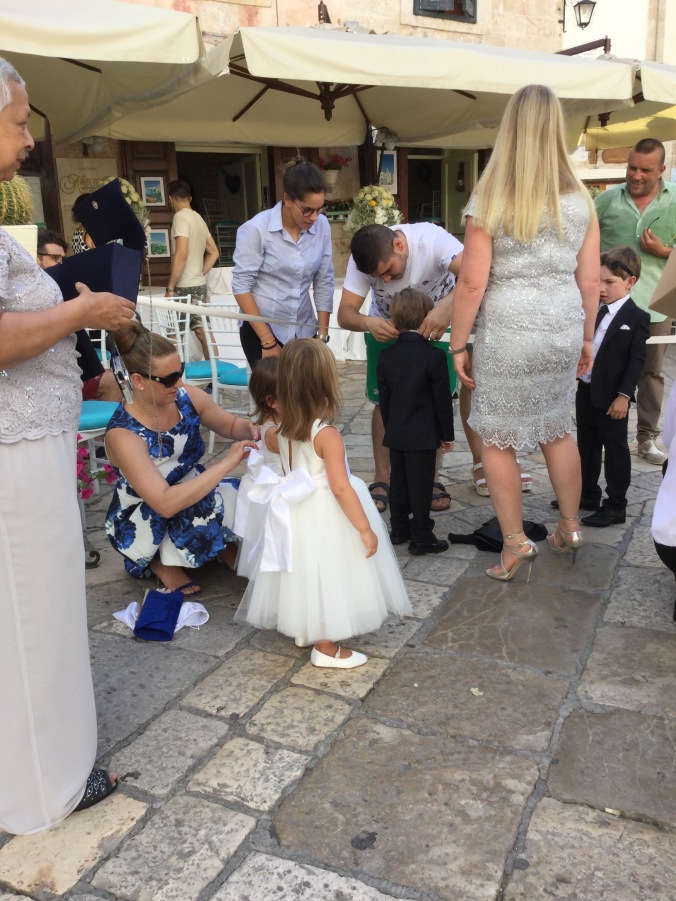 Guests were going into the church and some coming straight back out fanning themselves. Mothers of the 4 flower girls and 4 page boys were placating their small children whilst they tied bows, put flower wreaths on heir now sweaty heads and the little boys had ties done up by perspiring English dads and arms stuffed into men type suits by their equally red faced mums. Poor little kids. I think they  may have been sedated, as there was not one complaint or whimper let alone a definite NO! Very well behaved. 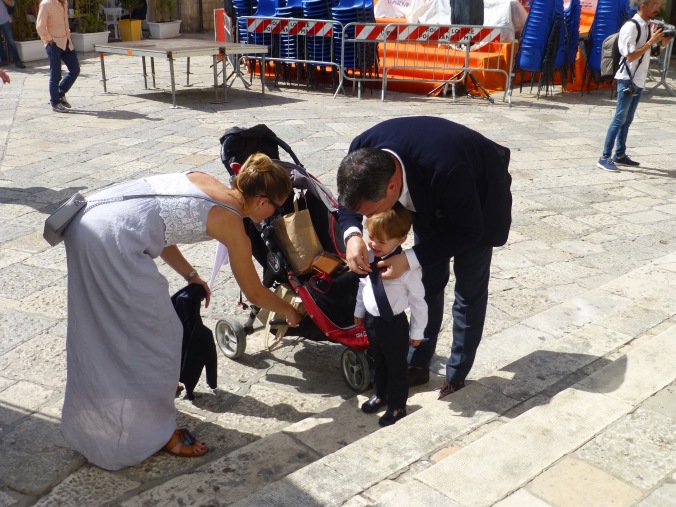 Finally the bride arrived in a beautiful,  heavily  beaded, skin tight gown. Exsquite but oh boy she would have been be so hot. I certainly was and I had a fan!

At this point we too we too hot and headed for Alberobella. This unique Unesco  World Heritage Site is like a fairytale village. It has many all white, grey shingled roofed houses called Trulli.

I had booked a little Trulli house for our stay and it was so charming and comfortable I could stay a week. Up a hill away from the Main Street it had a lovely main room , huge bathroom and a kitchen that didn’t get a thought from me even though it was great.

We had already enjoyed a wonderful lunch so didn’t feel hungry. Thirsty,  yes because of the heat so we rested awhile, then when it was cooler headed into the little Trulli lined streets. It’s very touristy but the majority had left and was busy with local families as there was a festival on. Children were dressed up in olden  day costumes and were recreating scenes from long ago. 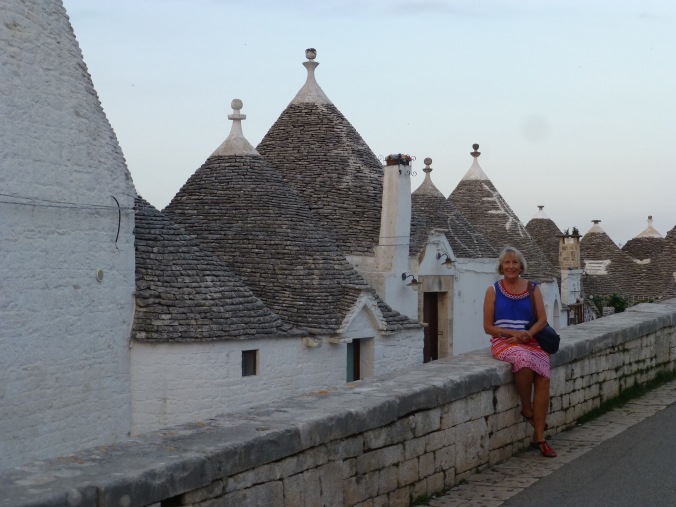 There was a town dinner, but we missed seats for that, so after our passeggiata we sat in a cafe (drinking cool white wine and eating grilled vegetable for me and a cheese and meat snack for Steve) in a piazza and watched the locals. I love the Italians. They dress up to parade and greet their friends. They eat gelato and the men gather in groups around the towns many fountains.

Finally made our way home to our little Trulli.

Has anybody else been here? If not you should visit.

A morning swim of about a kilometre finished the swims for the week.

25+ km is pretty good and lots of fun – not to mention healthy. That’s if you don’t count the beer and Aperol it took to rehydrate us after our swims.

Then it was a long bus ride with border checks back to Dubrovnik.

Good-bye to Tracey and Michael  at the airport and then onto Dubrovnik. It was hot and so crowded we decided to go straight to Sam and Anya’s hotel and eat and swim there for the afternoon.

Leaving beautiful Perest has been hard.  Swimtrek always seem to be able to find wonderful quiet places to base the swimmers,  and Perest was perfect. Now we were finding it hard to cope with the tourists!

So we enjoyed the afternoon by a lovely hotel pool and waited for our ferry for Italy. 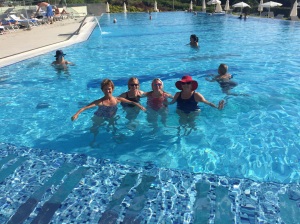 So  good-bye Swim Trekkers. We look forward to swapping photos (thanks Lucy for setting us up on What’s App) and maybe catching up further down the track . 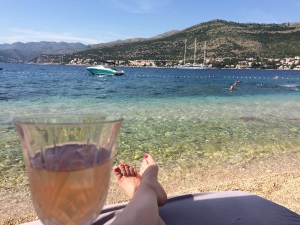 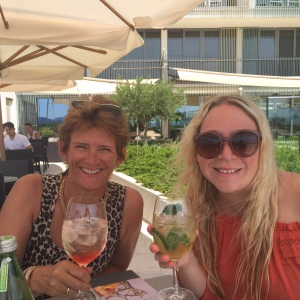