Antonio came to wish us goodbye. Really it was to make sure we hadn’t wreaked havoc on his place and to retrieve the keys.

So we decided to head south. Gallipoli is only about 45 mins from Lecce but we decided to visit a few places on the way. So we headed south to a rather uninspiring place called Maglie. We wanted coffee so headed onto Scarrano and drove into a piazza filled with activity. There were cranes and men all working to take down amazing lights. Like Christmas but even more! It was to celebrate a Saint – St Dominica. I love these Italians and their zest for a festiva.

We headed for the coast and found a lovely spot – Porto Tricase , where a swim could have been great but the weather had turned windy. So we went further south to Novaglie. A little port with lots of rocks and people sitting all over them. We decided to  have lunch then take the 2 hr boat trip for 15 euro to several of the natural grottos in the area. Fortunately the weather improved.

We boarded at 2 pm with 2 Italians in their 30’s  and 9 Polish people. Three couples and  3 children. It turned out well. They were all lovely people. I understood most of what the boat captain was saying. He had no English and the  Polish had no Italian, so Luna,  the 30 something Italian girl did most of the translation.

We motored down the beautiful coast line and saw various grottos with descriptive names. We got to one where we were told it was very dangerous but we could swim through a blow hole to an inside pool. It was all in the timing. Well off we went and naturally I got the timing wrong and bumped my head as I dived under to go through the arch. Fortunately no blood! I got out  ok though so all is good.

Then another grotto to enter. You had to swim then  climb rocks over a hill to a fresh water lake. It was also described as dangerous. So sensibly Steve and I decided rock climbing dressed only in a costume was not for us. We swam in the outer grotto instead.

Back to shore and emails exchanged with our new friends and off we drove to Gallipoli.

Gallipoli is named Gall meaning point and Poli meaning city – and is a fishing village with the old town over a bridge to a small island.

We found our B&B – Palazzo Senape Pace just as a big windy storm broke. That certainly cooled things down.

Our room is on the roof of the Palazzo and I think the Grandad of the family-run business checked us in. It has lovely seating areas out side the three rooms on this level. It’s charming and the room itself really old world comfort. I love it!

We prepared for dinner. It was dinner with theatre as well. Not really theatre,  just Italians being entertaining. A whole separate blog post! 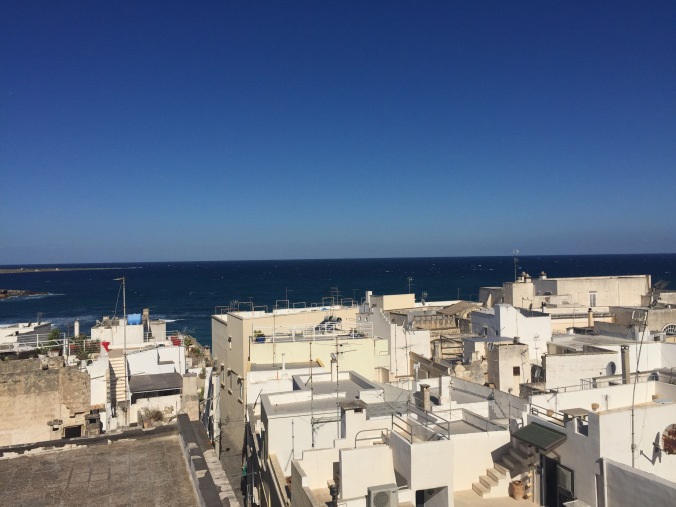 View from our terrace.

Me enjoying the terrace.

The entrance to our Palazzo

One thought on “Gallipoli. No not we’re not in Turkey. We’re in Southern Italy!!!”