The lifestyle here is very different to home. In many ways.

The most noticeable,  are the hours everyone keeps. It’s not just a holiday thing. It’s life.

People get up later, break for siesta, everything closes and then opens again at 5, dinner is always late.

So the early mornings  we seem to have in Australia, stop here and we enthusiastically join in. Up at the crack of 8, out for when things open at 10. Lunch when they close at 1pm. Siesta until 5. Out for passeggiata, shopping, aperitif until dinner after 8. And that’s considered early by restaurants that only open again at 8! Bed around 11.30.

But staying with John and Margaret and eating in most nights,  we have slipped into our own earlier time frame. Bed earlier. So this morning that led to a walk at 6.30 am.

Even John was having a morning off his usual run or ride,  so I was out the door,  as quiet as one of the little cats that slink around the little streets of the village.

I was the only one out! Truely. I didn’t see anyone else until I walked back up the Grand Rue at 7.45 where a few people sat in cafes smoking and drinking coffee.

It was so quiet I could hear fans inside open windows whirling. And my footsteps until the cobbles gave way to pebble paths. Then I crunched a little!

Cotignac is a small village built into the rocky side of an outlook. It is famous for its troglodyte caves. So the streets wind up from the Marie, where the Brannock house sits tall,  looking towards the sheer rock cliffs with caves built into its face. 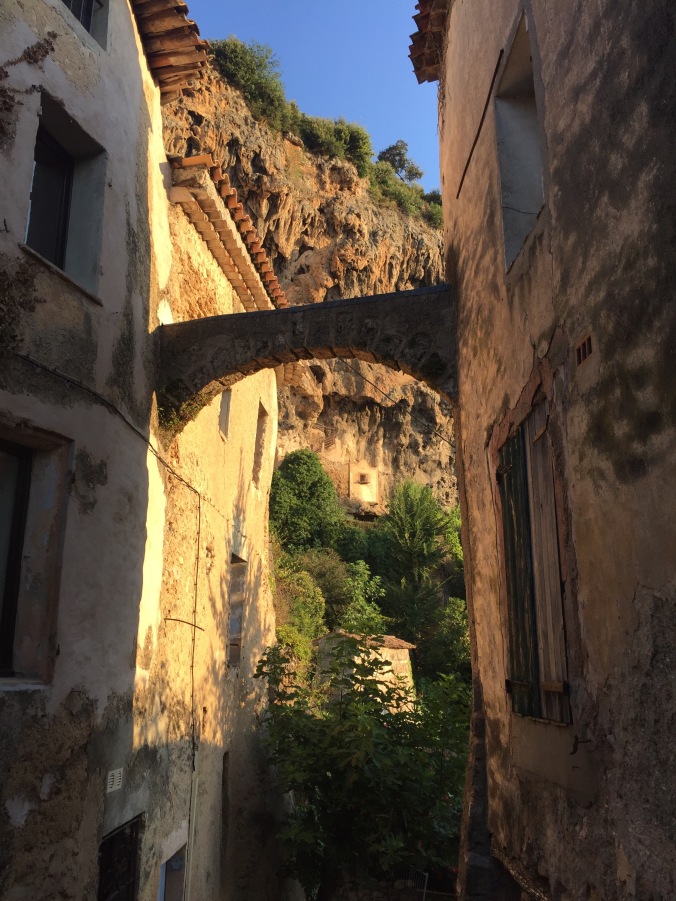 I followed the small winding paths past houses with shutters mostly closed, keeping morning sun out. Behind all those closed shutters people are sleeping or reading or making coffee or perhaps doing something more exotic? There are always rumours in small villages about what people get up to! 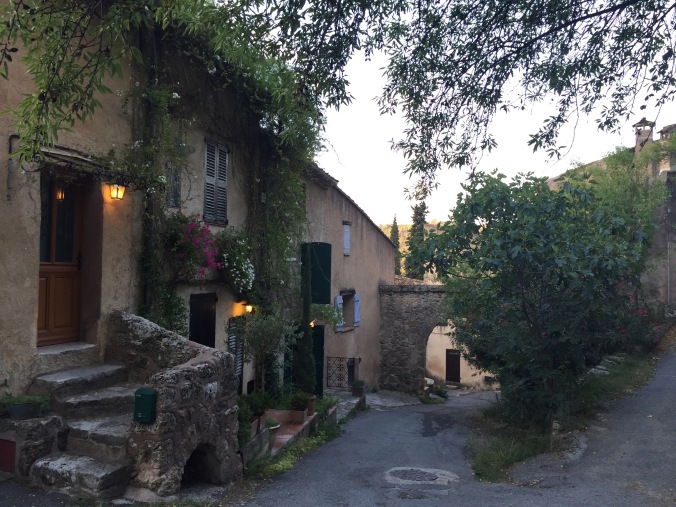 I decided to keep as quiet as a cat and take pictures. Particularly of the fountains and taps spurting or trickling water into stone basins. Apparently there are 15 such water features around the village. How many would I spy?

The path wound up. I looked over little fences, I came to a lookout,  back to the village, I wound up some more, I found a sign to a little appartment build into the rock wall. I walked on to the start of the route towards the cliff.

I kept looking at the view back to the village trying to spot the Brannocks house. It’s right on the Marie ( town hall place) and opposite the clock tower with the exquisite wrought iron bell tower. 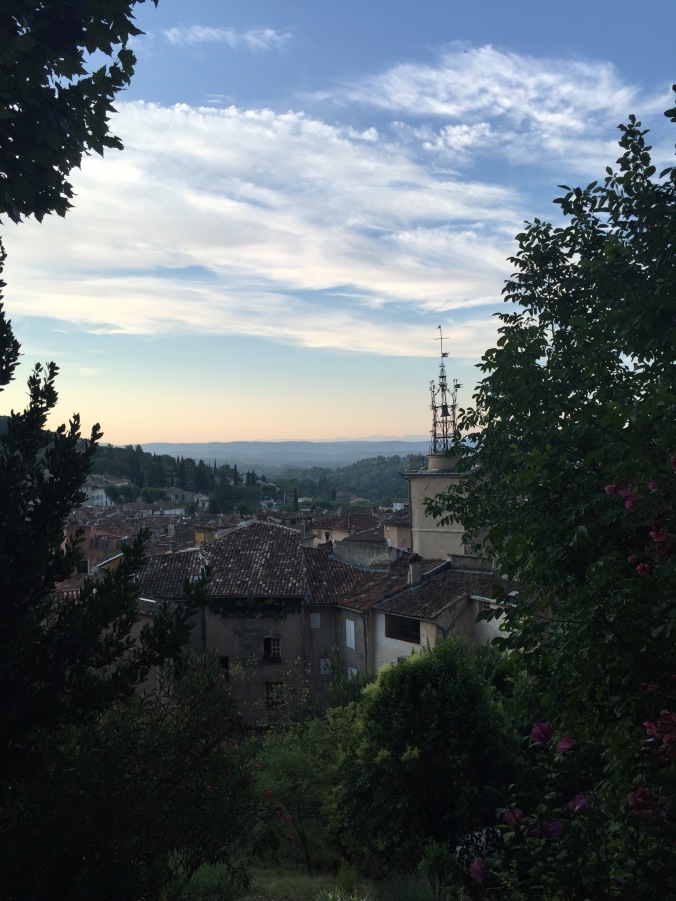 The council have built a paved arcade in front of the rock wall. There are stairs you can climb to go higher up the wall. I tried the big iron gate but it was still locked.

I walked into the little garden with its lookout. Th only thing moving were the cats as they became wary of my footsteps. The view back was lovely especially as the morning was becoming lighter. 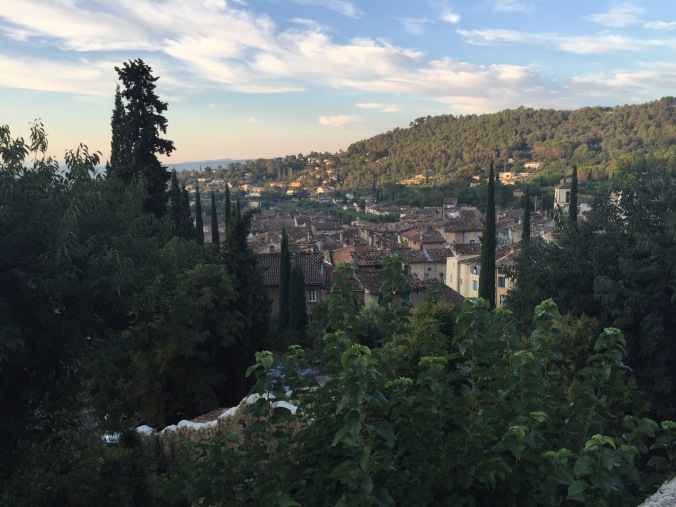 I felt so peaceful and alone but not lonely. It was gorgeous.

I made my way back to the village and saw the  bakery. First signs of life. It was still quiet. People were standing in a line outside, in silence. Not an unfriendly silence. – more an ‘ I’m still waking up silence’. 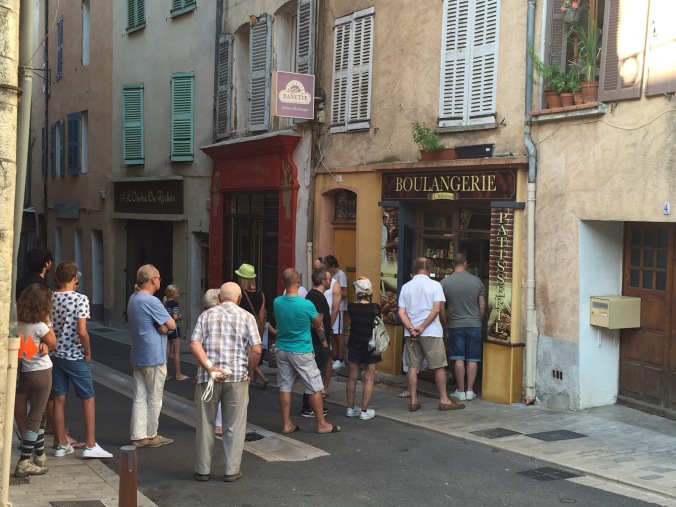 Then I passed a few people walking dogs or heading to their cars parked around the village. Without fail everyone wished me ‘ Bonjour Madame’.

Back to the house. I climbed the winding staircase to the kitchen.

I joined  Margaret for a cup of tea and to plan our day to another village, Lorgue where no doubt the routine of the morning would be the same as here.

We planned to arrive at 10 in time for cafe.

5 thoughts on “Morning Ramble through the Village”